Chris Fillmore on the #55 Bruce Rossmeyer's Daytona Racing/Revolution Performance/Geico-sponsored Harley-Davidson XR1200 leads this pack of riders into turn 1 at the Indianapolis Motor Speedway in race one of the AMA Pro Road Racing Vance & Hines XR1200 Series presented by Harley-Davidson Insurance during the RedBull Indianapolis MotoGP Weekend on Saturday, August 27.  Eventual race one winner Tyler O'Hara is just out of sight in the lead.  Fillmore would crash out several turns later, handing the win to O'Hara.  He would come back to win race 2 at Indy the next day, and regain a healthier lead in the standings after dropping to just 6 points ahead of runner-up Steve Rapp.

In what was arguably the best motorcycle road race ever held at Indianapolis, the XR1200 Series hit it out of the park on the legendary 2.6 mile road race course in their first appearance as the undercard of the MotoGP Weekend.  With a full field of XR1200-mounted riders, they put on the best race on Saturday afternoon of the MotoGP weekend that the iconic track has seen to date.  For over half the race on Saturday afternoon, this group of riders (along with winner O'Hara) drafted and swapped the lead all over the 16-turn facility at Indy.

Trying to keep things close include Jeremy McWilliams on the #99 Harley-Davidson of Bloomington/Indiana Biker's Choice/Rider's Insurance-backed XR1200.  McWilliams is the 2010 British XR1200 Champion who paid money out of his own pocket to travel across the pond in order to be able to say he competed at the iconic Indy track, The World Capital of Racing.  McWilliams was blamed for and involved in the crash that took out Fillmore just a few turns later, but remounted to finish the race in 10th.

Also in the mix is Indy double-runner up Steve Rapp on the #5 Parts Unlimited/Vance & Hines-sponsored H-D XR1200, who kept things close in the championship right until the end of this last weekend's season finale at New Jersey Motorsports Park.  Rapp also spent time this year racing a San Diego BMW in the AMA Superbike Championship, and also competed at the season finale at NJMP on a Cycle World/Attack Performance Kawasaki ZX10R in the premier class.  Rapp is also a former winner of the Daytona 200, having won the event several years ago while also riding for the Attack team on a Kawasaki ZX6R.  Rapp also scored two wins on the year on the big XRs as well as another podium finish.

And bringing up the rear for what would be a 3rd place finish on this fine Saturday afternoon in Indy, is 2011 Daytona 200 winner Jason DiSalvo on the #40 Latus Motors Racing/RSRaceCraft.com
/FMF/Speedymoto-backed XR1200.  DiSalvo jumped at the chance to race at Indy on the big XR12 for his team owner George Latus, and in early testing the week before set fast time after very limited time on the machine.  His bid to better his Saturday 3rd place finish came up short in race 2 at Indy with a reported mechanical problem, but when the weekend was done DiSalvo showed that his runs this year in the AMA Pro Road Racing Daytona SportBike Series class haven't been a fluke, in spite of a couple of crashes on the year to drop him out of the title lead.  It was great to see the young veteran back in the mix again, and on something he is not normally accustomed to riding regularly.

Fillmore took the title fight east to New Jersey over the Labor Day Weekend, and out fought runner-up Rapp to win the coveted #1 plate in the second season of the AMA Pro Road Racing Vance & Hines XR1200 Series, after Danny Eslick had claimed the crown in the series' inaugural, limited schedule season in 2010. 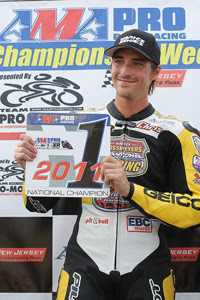 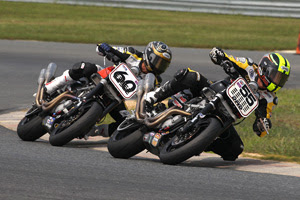 MILLVILLE, NJ (September 4, 2011) - The top two AMA Pro Vance & Hines XR1200 title contenders again squared off in yesterday's qualifying in preparation for today's final race of the season at New Jersey Motorsports Park. When the smoke cleared, points-leader Chris Fillmore had captured his fifth pole position of the year, while rival Steve Rapp had to settle for the second spot on the grid. 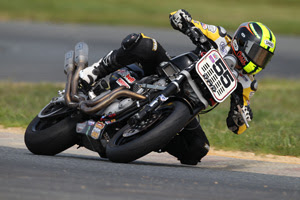 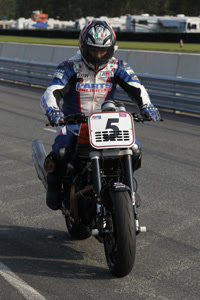 "It kind of went like it always does," said Rapp. "I didn't get any practice this morning, so I used the early part of the qualifying session to get up to speed and make sure the bike is balanced. Then I go out with new tires and do the best I can. I wasn't sure where Chris was at ... I ride as hard as I can and when the Harley is at its limit, it lets you know, and my bike was definitely giving me the signs that it was at the limit. I didn't want to do anything stupid, so I took what the bike would give and made sure I'm ready for [the race]."