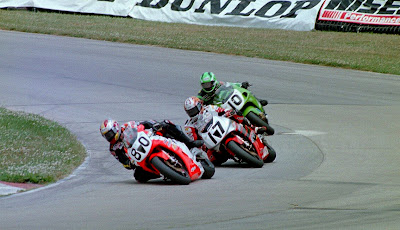 Kurtis Roberts on the #80 American Honda/Parts Unlimited/PJ1/Erion Racing-sponsored Honda RC51 leads Miguel Duhamel on the #17 American Honda/Shoei/Alpinestars/Dunlop-backed Honda RC51, along with Doug Chandler on the #10 Kawasaki/Lockhart-Phillips/Akrapovic USA/Dunlop-sponsored ZX7R during AMA Superbike Championship Series race action at Mid Ohio in July 2001.  The Wiseco Superbike 100 race 2 saw the three former champions battle in the top 6 throughout the course of the afternoon's premier event as part of the Honda Super Cycle Weekend presented by Dunlop Tire at the 2.5 mile course in Lexington, OH.

DAYTONA BEACH, FL (August 30, 2011) - The final round of the 2011 AMA Pro Road Racing Championship will play out in an action-packed Labor Day Weekend event at New Jersey Motorsports Park, where no fewer than four national championships will be decided. At stake are the AMA Pro National Guard SuperBike, Daytona SportBike, and Vance & Hines XR1200 titles, while the young-gun AMA Pro Motorcycle-SuperStore.com SuperSport series will crown both an East Division Champion as well as an overall national champion. 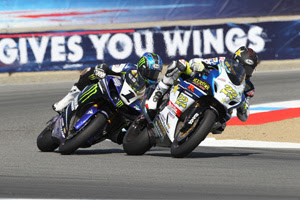 
In the Motorcycle-Superstore.com SuperSport class, local rider James Rispoli (ANT Racing Motorsports) has his New York-sights set on the East Division title as well as the overall Motocycle-Superstore.com SuperSport championship -- in addition to part of the $25,000 year-end prize money, provided by class sponsor Motorcycle-Superstore.com, that goes with it. Rispoli holds a commanding lead in the East Division series over LTD Racing Y.E.S. Yamaha rider Tomas Puerta, whose teammate, West Division Champion David Gaviria, is Rispoli's toughest competition for the overall title.
And finally, thanks to the incredible action of the past weekend's Red Bull Indianapolis GP -- where the AMA Pro Vance & Hines XR1200 presented by Harley-Davidson Insurance doubleheader brought Harley-Davidson machinery to the Speedway for the first time in 100 years -- AMA Pro's newest class championship has narrowed to just twelve points. Points-leader Chris Fillmore (Bruce Rossmeyer Daytona Racing GEICO) came back from a demoralizing crash in Race 1 to take the Race 2 victory, burning up his previous surplus of points but preserving a narrow lead. With just one race to settle the score, he and runner-up Steve Rapp (Parts Unlimited) will have each other and a full field of equally hungry competitors to contend with at NJMP.
In addition to the exciting on-track action, New Jersey Motorsports Park and AMA Pro Road Racing will play host to a wide offering of fan activities, from autograph sessions to Fan Walks to a fan-appreciation barbeque and more. To purchase tickets or to view a full schedule of both on- and off-track events, visit www.njmp.com or call (856) 327-7217. Same-day television coverage of the weekend's racing begins at 10 p.m. ET both Saturday and Sunday on SPEED.

To learn more and to be a part of the AMA Pro Road Racing Championship, visit amaproracing.com and join us on facebook.com/AMAProRoadRacing and twitter.com/AMAProSBK.