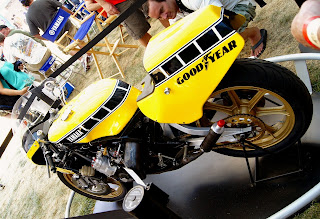 As part of Yamaha Racing's 50th Anniversary celebration this year they brought one of their classics out of mothballs for one of the all-time icons of the sport of 500CC World Championship racing to do some demo laps at the Laguna Seca round of the 2011 MotoGP World Championship in July 2011.  Kenny Roberts' 1980 YZR500 was brought out to do duty for the throng of fans on hand for the weekend's festivities, and The King as usual, did NOT disappoint.

Just as he had done at the Lucas Oil Indy Mile in 2009 when he ripped off some serious laps on his '75 Indy Mile winning TZ750, Roberts Senior went out and ripped off some laps on his 3rd World Championship-winning machine to wow the crowd at Mazda Raceway at Laguna Seca.  When The King hit the track, that same crowd went wild seeing the former 3-Time 500CC World Champion ('78-'80) run the 31 year old machine into the corners and wheelie out of the turns.  Whether you were around in those days or not, to either witness or watch from afar the feats that the Modesto, CA. resident accomplished in Europe, if you are a true racing fan you could feel the sense of accomplishment and thrill in the sound of the day's gone by in 2-stroke racing in watching a true icon of the sport giving back to his fans.

That same World Championship machine was also carted to the 2011 RedBull Indianapolis MotoGP round in August, and was on display under one of the Yamaha tents for all to see in the eastern part of the States.  Getting close to it was a chore, as anyone that passed the display wanted to get a close up look at one of the true racing machines in history.  And the look of appreciation and awe were never more evident than from the gentleman in the photo, by the look on his face!

Yamaha Racing put together a real nice little video of The King wowing the fans at Laguna this summer, and you can check it out below while you take in the great machine that was that took American Kenny Roberts to his 3rd of three 500CC World Championships, the first time someone from this side of the pond had done so in those days, opening the flood doors for other supermen of the sport like Kevin Schwantz, Wayne Rainey and Eddie Lawson (to name just a few) to head to Europe to show the boys what us Yanks had in the tank when it came to road racing at a highly competitive level.

Thanks to Yamaha Factory Racing for it's 50th Anniversary video celebration of The King bringing his 1980 YZR500 out of mothballs at the RedBull Laguna Seca MotoGP round to do some demo laps for the crowd.  Listen to the sound of that sweet thing!