AMA Flat Track: The Fast & Dirty.com Bring You Knoxville Video as We Get Fired Up for Today's Brainerd Half-Mile 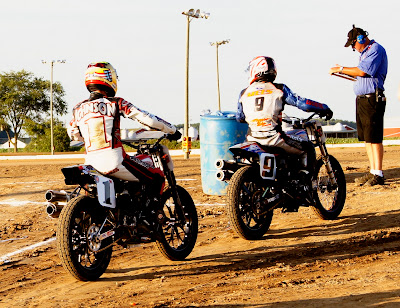 In what is being called the closest-ever finish in an AMA Pro Flat Track Grand National Championship Series race, Jared Mees and Jake Johnson took it right down to the wire at round 17 of the 2011 AMA Pro Flat Track Harley-Davidson Insurance Grand National Championship Series at the Knoxville Raceway two weeks ago. Mees, on his #9 Rogers Lake Racing/Screamin' Eagle/Blue Springs H-D/Lucas Oil-sponsored H-D XR-750 edged out defending AMA Grand National Champion Johnson on his #1 Zanotti Racing/Schaeffer's H-D/Boughner Racing/Arai-backed XR in a virtual photo finish, to win by just .004 seconds and take the overall point lead in the championship for the first time this season.


As we look at a shot from the Stu's Shots vaults of the two men getting ready to roll out for their heat race earlier this year at the I-96 Speedway at Lake Odessa, MI., we ponder the championship battle at hand in what has become one of the closest title fights in the decades old serie,s that for all intents and purposes now pits Mees, Johnson and Sammy Halbert on his #7 Kings Kustoms XR-750 into a three-way battle going into the last three events of the 20-event 2011 season.  With Halbert having led the way the entire way going into Knoxville, after his 3rd place finish at Knoxville two weeks ago, he now finds himself 4 points behind new leader Mees (321-317.)  Defending champ Jersey Jake lies a mere 5 behind Slammin' Sammy with 312 markers, and Mees now out front in what has been a stellar run on his part in the Twins Series events that started over half a season ago at the Springfield Mile I event.

With Mees's win on the half-mile in the midst of Iowa's corn fields, Jammin' Jared equaled Halbert's four wins on the season, with Johnson having two wins on the year, but coming in the Singles Series events.  He has yet to see the top step on the box in the 2011 season, but was oh-so-close just two weeks ago.

So what will happen today as the riders unload at the North Central Speedway in Brainerd?  Will the defending champ pull out the stops and show what champions do and what the advantage of having that #1 plate on your machine can be?  Will Halbert regain his form from the first 16 events of the year and leave the north country and head to the final two rounds on the west coast with the point lead firmly in hand again?  Or will The Jammer outshine them both in what has been a virtual career-year for the Michigan resident?

To help relive the action at round 17 of the 2011 AMA Pro Flat Track Harley-Davidson Insurance Grand National Championship Series at the Knoxville Raceway from two weeks ago, Will and Yve from The Fast and Dirty.com bring you this super video of the great battle at the World Capital of Sprint Car Racing:

And you can read up on the story of the great race at Knoxville here with the race report filed by two of the best in the business, Larry Lawrence and Cycle News.com's Digital Edition:

You can follow ALL the action below from the North Central Speedway in Brainerd, MN. today as round 18 of the 2011 AMA Pro Flat Track Harley-Davidson Insurance Grand National Championship Series rolls into the last round of the year to be held in the Midwest.  Located approximately 75 miles northwest of the Twin Cities, the Home of Paul Bunyan Land will play host to the boys and girls of The Rolling Thunder Show are set to put on a show for the Minnesota fans that will have them shaking their heads and shouting with glee.


And a big thanks to Miriam Deitcher, for her Flat Track Live @ Facebook for providing fans away from the track with constant updates, photos and videos of what is happening AT the track:

And for those of you wanting to keep an eye on the weather at Brainerd, thanks go out to the great folks at The Weather Underground.com for this link: