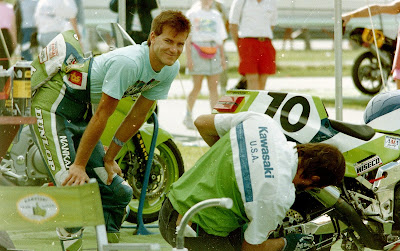 Eventual 3-Time AMA Superbike Champion Doug Chandler takes the time to give Stu's Shots one of those killer sly grins during a break from the on-track action at The Coca-Cola Super Cycle Classic round of the AMA Superbike Championship Series at Road America in late June of '90.  The late Merlyn Plumlee tends to DC10's #10 Muzzy Kawasaki/Wiseco/Nankai/Dunlop-sponsored ZX-7R in the grassy area of the paddock at the flowing four-mile track outside Elkhart Lake, WI.

Chandler would go on to overtake the late Randy Renfrow on the #5 Commonwealth Racing Honda RC30 during the AMA Superbike Championship Series main event on Sunday, July 1 to win one of four races on the year to take his first of three championships in the U.S. superbike series while riding for the Bend, OR.-based Muzzy team.  Chandler would head to Europe in the '91-'94 seasons to contest the 500CC World Championship, riding for Kenny Roberts and the Cagiva team in the premier road racing series in the world.  Returning to the States for the '95 season, he would sign for the Harley-Davidson VR1000 team, but suffered injuries that year which kept him off the track for some of the season. 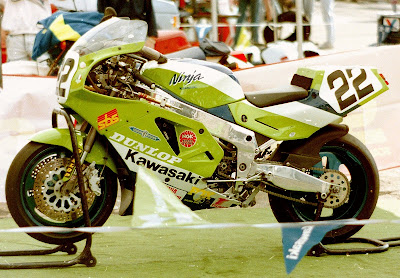 Scott Russell's #22 Muzzy Kawasaki/SBS/NGK/Dunlop-backed ZX-7R sits in the paddock area during the WERA Grand National Finals/F-USA Series weekend at Road Atlanta during late October of 1990.  Story had it at the time that the bike was actually Doug Chandler's AMA Superbike Championship-winning machine that was brought into duty to help Russell get some track time in the run-what-ya-brung premier F-USA doubleheader round outside of Gainesville, GA.  WERA ran a doubleheader weekend for the F-USA class to make up for the canceled-due to rain round at Indy's IRP in early October, and with the AMA Series having been wrapped up for the year, the bike was available to run in the talent-laden F-USA finale weekend.  Other racers on hand for the big round were Dale Quarterley, Mike Smith, the late Mike Harth, Kurt Hall, Tom Kipp and Marlboro Roberts's Robbie Petersen.

Russell would finish 5-2 on the weekend at Road Atlanta, but set a new track record (that had been held by Doug Polen) during the Sunday finale while trying to run down Kenny Roberts'/Marlboro's Robbie Petersen on the Yamaha YZR500 that Wayne Rainey had just won his first 500CC World Championship on.  Russell was forced to start from the pitlane (for reasons I can't remember in my old age!) but rode like the future champ he was to be in passing riders left and right all over the course of the season-ending race, and would finish less then 2 seconds behind Petersen's GP bike at the end of the day.  The Screaming Chief put on a riding clinic in using the curbing as a berm for the Superbike ZX and wowwed the crowd on-hand in the process.

One of the sport's leading (and legendary in his own right!) historians, LL tells the story like no one else could about the rise to fame of the Muzzy team with the then-new ZX-7R that took road racing around the world by the throat, and tamed it: