AMA Flat Track: Fly With Jared Mees at the Peoria TT Video by The Fast & Dirty.com 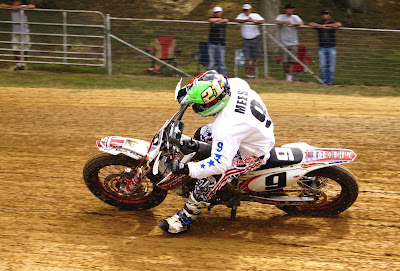 Jared Mees has his #9 Lucas Oil/National Cycle/Rogers Lake/Montgomeryville Cycle Center-sponsored Honda CRF450R all but ready to pop the rear tire off the rim as he exits turn 5 for the run to the stripe during qualifying for the Peoria TT on August 21.  The runner-up at the time in the overall point standings in the 2011 AMA Pro Flat Track Harley-Davidson Insurance Grand National Championship Series had a great outing at the amphitheater setting in the lower Peoria valley as he won the Dash for Cash event over eventual main event winner Henry Wiles and defending AMA Grand National Champion Jake Johnson.  With then-point leader Sammy Halbert finishing 5th in the Dash, coupled with his 3rd in the National main, Mees was able to close the point gap from a 10 point deficit to a 3 point deficit after his runner-up finish in the main.

But 2011 has brought an even more focused, winning attitude to the Michigan veteran and former AMA Horizon Award winner.  Taking his first win in almost four years at the Springfield Mile I event in late May, The Jammer has since been on a streak that has included three more wins and two-handfuls of 2nd and 3rd place finishes.  And with his win two weeks ago at Knoxville in the main and in the Dash event, Mees took the overall points lead in the series over season-long leader Sammy Halbert. 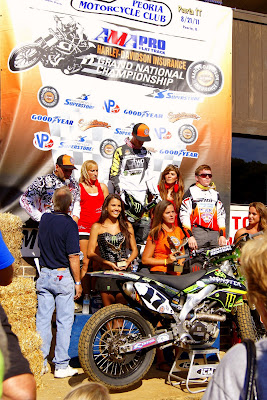 A big thanks again go out to Will and Yve from The Fast and Dirty.com for bringing us this great video of highlights from Jared Mees' 2nd place run at the Peoria TT from August 21, round 14 of the 2011 AMA Pro Flat Track Harley-Davidson Insurance Grand National Championship Series.  Thanks guys for all you do for AMA Pro Flat Track!