Johnny Lewis talks in the pit area during the break in the on-track action at round 11 of the 2011 AMA Pro Flat Track Harley-Davidson Insurance Grand National Championship Series at Lake Odessa, MI. on July 23.  Lewis' stable of #10 Scott Powersports/Dubach Racing Developments/Saddlemen/Triple J Racing-sponsored Kawasaki 650R-based mounts sit alongside for all to view and see during the fan pit walk at the I-96 Speedway Half-Mile event.

JL10 and the Scott Powersports team have made some substantial strides in the series this year with their now-second year mounts.  His 2nd place finish (the best ever for this former Supermoto competitor in the Twins Series) at the Hagerstown round, added to his 5th place finished this year at Hartford, along with dual 6th place finishes at The Springfield Mile II and Knoxville have helped keep him and the Scott team in the 7th overall spot in the championship standings, with 165 points.

Lewis had a virtual rocket at Springfield earlier in the month, and led several laps for his first time leading a National mile event.  If not for the red-flag interupted event, and the ensuing 5 lap dash to the end, his 6th place finish very well could have been even higher. 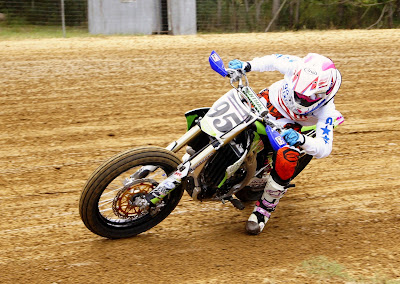 JD Beach powers his #95 Universal City Kawasaki Motorsports/Morlandt Electric/Alpinestars/Arai-sponsored KX450F during an early practice session at the Peoria TT round on August 21, 2011.  Beach used the weekend off from the AMA Pro Road Racing Superbike Championship Series calendar to get in some seat time at the legendary Peoria facility, and was rewarded with a 13th place finish at the end of the day for his efforts.  With a deep, 18-rider field in the National main, Beach fought with Brad Baker and Shaun Russell throughout the 25-lap main event.

JD showed up at the Knoxville round the weekend before last, with all of his duties done for the year on the Cycle World/Attack Performance Kawasaki, and proceeded to put the USC/Universal Kawasaki 650R-based machine in the main, and sailed home to a 5th place finish for his best-ever finish in an Expert Twins Series event, as well as the best finish for the USC Kawasaki. 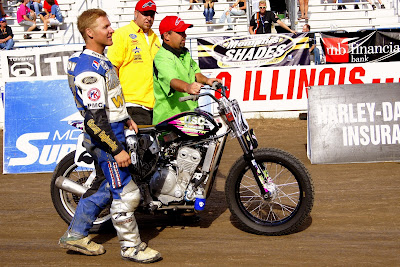 Morton, IL. resident Rob 'Bugs' Pearson waits alongside of his #27 USC Kawasaki/WKR/Hart Racing/Shoei-sponsored team in preparation for the National main event at the Springfield Mile II round of the 2011 AMA Pro Flat Track Harley-Davidson Insurance Grand National Championship Series on Sunday, September 4.  Pearson was drafted to run the USC machine for the day and earned a ticket to the main via his heat #3 fourth place finish.  However, during the main (before the red flag interuption) Pearson's mount threw a chain and put him down-thankfully and largely unhurt.  But his day was over and he was credited with a 16th place finish.