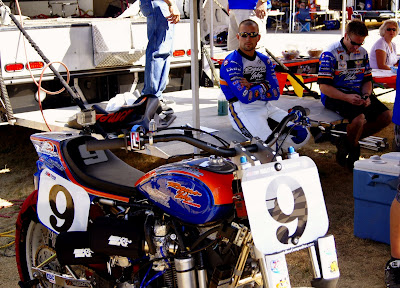 Jared Mees checks out the goings on in his pit area in between the break in the on-track action at round 16 of the 2011 AMA Pro Flat Track Harley-Davidson Insurance Grand National Championship Series at the Springfield Mile II on Sunday, September 4.  The Rogers Lake Racing/Blue Springs H-D/Screamin' Eagle/Lucas Oil-sponsored XR750-mounted rider had a great day on the mile oval at the Illinois State Fairgrounds, starting with a win in heat #2 after qualifying 5th on the day.  The Jammer went on to win the Dash for Cash event over then-overall point leader Sammy Halbert, and coupled with his 5th place in the National main event, left Springfield within 5 points of leader Halbert in the standings.

At round 17 at the Knoxville Half-Mile the next weekend, it was ALL Mees as he won his heat, took home the points and the cash in the Dash event, and went on to win the National main over defending AMA Grand National Champion Jake Johnson, in what could very well be the closest margin of victory in the Grand National Series in years...just .004 seconds ahead of title rival Jersey Jake.  With Slammin' Sammy coming home in 3rd at the World Capital of Sprint Car Racing, Mees stole the show--and the point lead--and now leads the standings over Sammy, 321-317, with Johnson in 3rd with 312 points, with only three events remaining in the season.

Last year this race was rained out. This year it seemed we would finally get to race as the weather looked good. This track has a lot of history as the site of the Knoxville National Sprint Car races. I was here last year for a small exhibition race and it was packed, so I was excited to come back. I knew the track would favor my style a bit.

Qualifying went well as I ended up 2nd overall, with Jake Johnson 1st. I won my Heat and everything felt good, with some quick times, so we did not change much on the bike. The track was very hooked up, and as hard as you could charge it in the corner and pick up the gas, the faster you could go. It was like riding Savannah. Hard to pass for sure.

For the Dash for Cash I came off the line side by side with Jake and got the lead going into the corner. I knew it wasn’t over as Jake was sitting right on my heels but I was able to hold him off the five laps and win the $1000 bucks and the 5 bonus points. Still, I knew he would be tough in the Main and it would be a close one.

For the Main Event we made no changes, just a fresh tire and gassed it up. I picked 3rd starting spot…same place I was in the Dash, got a decent start and was 2nd behind Jake. I followed him for a few laps and seemed to be faster in a certain spot. I made a move and got by. I took note where I was faster, but he was also breathing down my neck, it was close.. Right before the half-way point he came back by me in that spot. I followed close, trying to rebound, but there was a red flag when Jeff Carver went down. It was a staggered re-start, with me in the 2nd spot. Jake got the jump and I was running all over him trying to get up the inside but could not make it stick…he was guarding the bottom of the track really well. On the last lap I was on his butt going into turn 1 and just picked up the gas and drove to the outside of Jake. He spun it up and dropped to the bottom of the groove going down the back stretch. I kept it high and drove it around the outside and made it stick. Coming off turn 4, I just held on to it at the line for the win. It was an “oh so” close finish! My Harley-Davidson XR750 was flawless, and we were riding them with everything we had to give’em!!

This was one of the best half-mile races I have ever had. It was another highlight to the season. It was great to battle it out with my friend Jake who came in 2nd. We rode against each other hard and aggressive but never once touched.

Thanks to my mechanic, Brent Armbruster, and the whole Rogers Lake Team for all the hard work… thanks to my sponsors and everyone else who makes this all happen. I now have taken a 4 point lead in the Championship Series standings. We are just going to take this one race at a time, and we are looking forward to a great end to a memorable season.


We have next weekend off. I am going fishing. Hope to see ya at Brainerd MN.

Check out The Fast and Dirty.com's latest video featuring Jared Mees on his #9 Rogers Lake Racing/Blue Springs H-D XR750 from the Springfield Mile II round over the Labor Day Weekend.  Great action from The Jammer, Yve and Will from The Fast and Dirty, as well as Blue Springs Harley-Davidson.  The Jammer also talks about wearing the Gary Nixon tribute riding gear during the event at the Springfield Mile II.

Click here to go for the ride of your life on the fastest mile circuit in the nation: