AMA Flat Track: With 3 To Go In the '11 Season, The Stars of the AMA Grand National Championship Series Head to Paul Bunyan Land 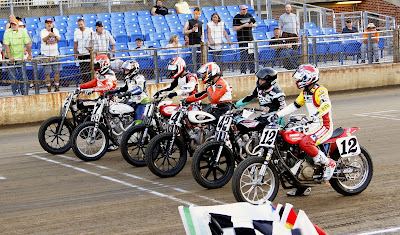 The Dash for Cash entrants at the Springfield Mile I line up and get ready to go at round 6 of the 2011 AMA Pro Flat Track Harley-Davidson Insurance Grand National Championship Series at the Illinois State Fairgrounds on May 29.  The top two finishers in the three heat races on the day lined up as the last event at the rain-delayed round, and when the four-lap race was over, Sammy Halbert had again added valuable points to his then-lead in the overall championship standings.


Halbert on his #7 Kings Kustoms/White's H-D/LZ Racing/KK Supply-sponsored XR750 had led the entire 16 rounds in the overall point standings after winning the doubleheader opening rounds at Daytona in March, and backing those up with wins at the Lima Half-Mile and at his home event, the Castle Rock TT.  But the wheels started losing grease and with his 3rd place finish at Knoxville some 10 days ago, lost the lead in the standings to Jared Mees.  With three rounds to go, can Slammin Sammy climb back on top to take his first official Grand National Championship?  Only time will tell.

Kenny Coolbeth, Jr. on his #2 Harley-Davidson Motor Co/Screamin Eagle/Spectro Oils/Fox-backed factory Harley-Davidson XR750 has kept himself in the hunt the entire season, especially after winning round 3 back in April at the Duquoin Indoor Short Track.  But the top 3 have left the former 3-Time Grand National Twins Series Champion in their dust, and going into round 18 this weekend at Brainerd, The King of Cool sits in the 4th overall spot with 256 points.  With still a slim, but fighting chance to battle for the 2011 AMA Grand National Championship, he will have to beat those top 3 in the end and hope the wheels on their machines also start to lose some grease.

7-Time AMA Grand National Champion Chris Carr has three races remaining on his 2011 Farewell to Flat Track Tour, and you can bet the #4 American Motorcyclist Assoc/DFW Honda/Arai/Phoenix Racing-sponsored and Kenny Tolbert-tuned XR750 pilot will be in the thick of things trying to get that last, but elusive win, before he hangs up his steel shoe for good.  The Prince of Peoria hasn't missed a beat all year long, in spite of not being able to bag another win since the '08 Lucas Oil Indy Mile, but his 5th place in the overall standings (206 points) would just about tell another story on what he HAS done this year in terms of hanging with the crowd.  The 26 season veteran came within .012 seconds of getting that final win at the Springfield Mile earlier in the month, but was beat out by his former team mate and student, Willie McCoy.

Bryan Smith rolled out his new look at Springfield back in May, with a pair of sparkling aqua/white/red and black XR750s with his #42 hanging from the number plates, after having ridden for the Werner Springsteen Monster Energy Kawasaki team during the 2010 season.  The Moroney's Fasthog.com/American H-D/Rockyonline.com/Boughner Racing-backed rider was able to get right back into the mix again, winning his heat race and running at the front until his mount broke in the main.  Flyin Bryan hung with the crowd, though, and with solid results and hard work, finally bagged his first win of the 2011 season at the Sacramento Mile in late July.  Even though Smith is out of the title hunt in the 9th spot of the standings (152 points), he could still be the one to win some battles while the top 3 are fighting their own war.

Brad 'The Bullet' Baker burst into the first Twins Series event of the year at the Illinois State Fairgrounds in a REAL big way to kick off his first full year in the Expert class--he went out and set fast time, won fast heat, led some laps on the fastest mile in the nation, and fought a bucking and weaving and wobbling Ducati to the end and brought it home in the 5th spot while doing so.  The #12 Lloyd Brothers Motorsports/TeamHurtbyAccident.com/Nicky Hayden/ENI USA-sponsored and Ducati 1098-mounted rider has held solid all year, slipping some in missing the mains at Hagerstown (due to a bad throttle position sensor) and Knoxville.  It did cause him to slip to 6th in the overall standings (198 points), but the '09 AMA Pro Flat Track Pro Singles Series Champion is still a virtual shoe-in for the Saddlemen Rookie of the Year Award, and is still likely to be in the mix to the end.  For what should have been a learning year for the Expert rookie, he has more then stood tall several times, not only in the saddle on the track, but with his million dollar smile off the track as well.  Once Baker and the Big Duc get their irons out and all of the wrinkles taken out of the linen, the rest of the competitors in the series better watch out.

Defending AMA Grand National Champion Jake Johnson is the racer's racer.  Quiet off the track, laid back and poised.  But on the track, the #1 Zanotti Racing/Schaeffer's H-D/Boughner Racing/Arai-sponsored and XR750-mounted veteran is a machine that rolls fast, hard and deliberate.  Currently sitting in the 3rd spot of the standings, 9 points out of the championship lead behind Mees, Jersey Jake was over 20 points out of the lead in the 2010 season with 3 to go when it all came together for him and the Zanotti team.  In order to do that this year, Johnson has no other choice in the final three rounds but to finish ahead of Mees and Halbert, no matter where that may be on the track.  The cool and calculated Pennsylvania resident has been here before, and like champions do, this champion will be there fighting to the very end.  And remember as I have said all year, you NEVER count the guy out with the #1 plate on his machine and on his back.  As long as he shows the other two guys his back during the last three rounds, Johnson will be the first repeat champion since Chris Carr in the '02-'03 seasons. 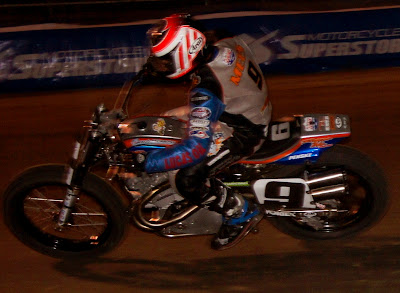 Jared Mees checks out from the field during the Lake Odessa Half-Mile event at I-96 Speedway on July 23, during round 11 of the 2011 AMA Pro Flat Track Harley-Davidson Insurance Grand National Championship Series.  Mees was in the middle of a serious romp on a variety of tracks at the time on his #9 Rogers Lake Racing/Blue Springs H-D/Screamin' Eagle/Lucas Oil-sponsored and Brent Armbruster-tuned XR750, and has not let up since.

DAYTONA BEACH, Fla. (Sept. 16, 2011) - Following one of the closest finishes in the history of AMA Pro Racing, the Harley-Davidson Insurance Grand National Championship Series moves from the high-speed Knoxville Raceway to a brand new event at the North Central Speedway located in Brainerd, Minn., scheduled for Saturday, September 24th.

Located in the picturesque "Land of 10,000 Lakes," it will be the first time the northern Minnesota track will host the stars of AMA Pro Flat Track. With only three races left to settle the 2011 AMA Pro Harley-Davidson Insurance Grand National Championship, a battle for the championship has come down to three riders. 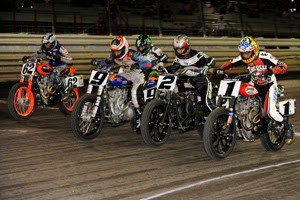 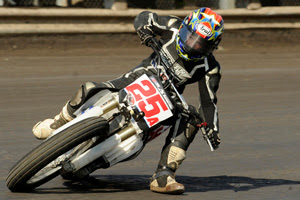 Another historic first was achieved at Knoxville with the sensational accomplishment of Shayna Texter, who firmly placed her name in the history books by becoming the first female to win a Pro Singles main event in the long history of this great sport. Texter (RLT Racing / Lancaster Harley-Davidson), overcame a poor start to pass her way to an extremely popular and well-deserved win. With her first win in the books, Texter is sure to carry momentum to Brainerd. The crowd is guaranteed to get a great show from Texter and the rest of the Pro Singles riders.

And be sure to keep up with all of the action from the North Central Speedway, in Brainerd, MN. with Miriam Deitcher's excellent Facebook Flat Track Live: