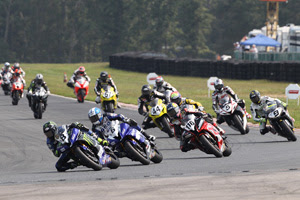 
Each rider seemed to typify the particular skill and strategy they've become known for in today's race, Herrin the smooth, determined veteran; Westby the late-race charger; Beaubier the constantly evolving rookie; Aquino the mercurial pilot capable of more than past seasons have shown. With a brief pause caused by a red flag (which flew after a crash by M4 Suzuki's Santiago Villa, who was quickly on his feet), the four-rider pack -- made five by Danny Eslick for the first half of the race - diced non-stop through the 23-laps, sliding forward and back through turns while trying to out-draft and out-break as they tore down the front straight.
"Today I thought I had something for Josh," said Westby, who'd been eager to erase yesterday's crash with a victory today, "but [it wasn't] enough that I could make it happen. Too bad it's the end of the season, because I'd like to do some more racing, but I look forward to seeing everybody next year." 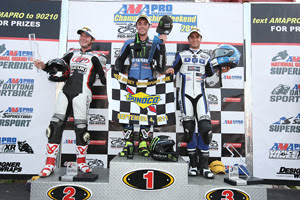 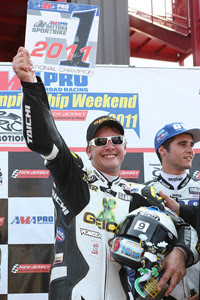 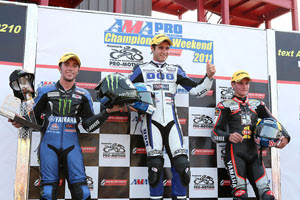 "Those last four or five laps," said Aquino, "I kind of put it in my head that that was the best chance I had [to win a race]. Dane wasn't going to give me an inch and ... I was lining him up for a pass in Turn 6 and was going to go for it no matter what, but before I had a chance, he was gone. I got in the lead from there and tried to just put in a flawless lap. I really didn't know who was behind me, I just focused on Dane at first and then just on getting a clean lap. I thought, 'You're a professional -- do one lap, how hard can it be?' Very hard, if you're wondering. It was a great weekend, and I have to thank the Yamaha Extended Service crew -- this win is for them." 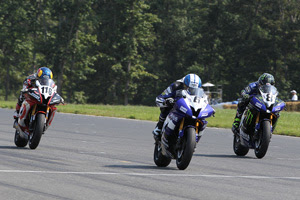 
To learn more and to be a part of the AMA Pro Road Racing Championship, visit www.amaproracing.com and join us on facebook.com/AMAProRoadRacing and twitter.com/AMAProSBK.