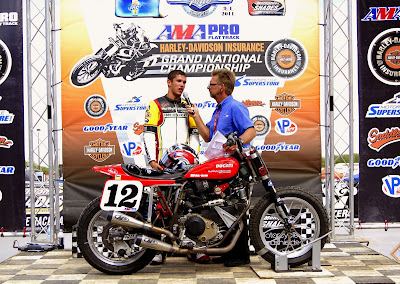 Brad Baker #12 is interviewed on the victory podium after winning semi race #2 at the Springfield Mile II on Sunday, September 4 by AMA Pro Flat Track announcer Barry Boone.  The Rookie of the Year shoe-in used the practice sessions as a 'test' to try and work out the chassis wobble that the Lloyd Brothers Motorsports/TeamHurtbyAccident.com/Nicky Hayden/ENI USA-sponsored and Ducati HyperMotard-based team had experienced at the spring round of the 2011 AMA Pro Flat Track Harley-Davidson Insurance Grand National Championship Series at the Illinois State Fairgrounds.

After qualifying in the top spot right out of the box in his first Twins Series event of the year in May, the machine started to suffer from a wobble while on the straightways at the legendary track.  Brad still fought it hard and brought home a very admirable 5th place in the main.  Returning over the Labor Day Weekend, the team worked on set-up to work out the problem, but made the bike somewhat slower, resulting in a 17th place qualifying spot, .683 seconds behind fast qualifier Kenny Coolbeth, Jr.  But Brad told team co-owner that 'at least it wasn't wobbling now.'

Fighting through his heat race, The Bullet was forced to run the semi in order to qualify for the main, and ended up winning over Shaun Russell to take his transfer to the National event, round 16 of the 2011 season.  Brad worked his way through the field, and as a result of the windy conditions on the day, suffered what ended up being a minor scratch on his eye from dirt getting in it.  Still the fighter, Brad brought it home in a solid 8th spot for the day in the final 5 lap dash in the red flag interupted event, and reported after the race weekend that his eye was okay and no major damage was done.  Of course being the hard charger and former Pro Singles Series Champion that he is, he wasn't satisfied and is ready to fight for more. 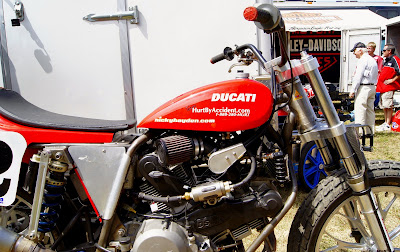 “This past weekend we planned on using our three 4-lap practice / qualifying sessions and heat race to test a range of chassis, suspension and tire settings in hopes of finding a stable, fast set up for the main event. The team was really happy that in both the semi and main event the bike handled well, was stable and fast” continued team co-owner Michael Lloyd.

“It was a tough day for me actually because I want to go out and win every time that I am on the track. I had to be patient and test today to prepare for the main. The bike felt really good in my semi qualifier and I was able to win that easily over the bike that won the main event here last year so I know that we were ready for the main event. Unfortunately, I got some dirt in my eye in the early part of the main event and scratched my eye. When they stopped the race with 5 laps to go I was a mess. We flushed my eye out the best that we could on the front strait while waiting for the restart. I decided to finish the race but I had to back off and bring it home safe. If not for my eye I think that I would have been able to race with the top seven instead of just following them home. I am really looking forward to coming here next spring since we now have a good setup to start the day with” said Brad Baker.
“In seven Twins events, Brad has qualified 1st twice, 2nd twice, won 3 heat races and qualified for 4 Dash races. He is a contender everywhere that we show up. I couldn’t be happier with the efforts of the entire team. If you look at the history of the series, getting new types of bikes to the front is a serious challenge. Every one of our team members and sponsors is working very hard and supporting each other as we work towards our bike’s second win and Brad’s first win as an expert” stated team co-owner David Lloyd.

You can keep up with the Lloyd Brothers Motorsports Ducati team here via their official site:
http://www.lloydbrothersmotorsports.net/index.htm
Posted by Stuman714 in Indy at 7:59 PM