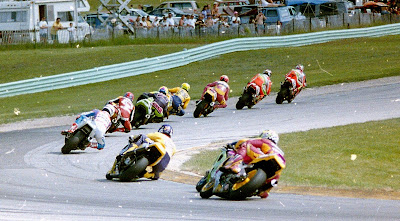 The Coca-Cola Super Cycle Classic Weekend at Road America in June 1994 witnessed one of the most controversial race finishes in the history of the AMA Superbike Championship Series, to go along with some of the best on-track action that the riders and machines had put on in front of the crowds at the sprawling Elkhart Lake, WI. facility since the series first hit the scene north of Milwaukee in the early '80s.

Eventual '94 series champion Troy Corser is shown leading the pack on the first lap of the AMA Superbike Championship main event at the end of lap one coming out of turn 14 for the run up the hill on his #19 Ducati Motorcycles/Pro Grip/Dunlop/Fast By Ferracci Racing Products-backed Ducati 955 as team mate Pascal Picotte on his #21 Ducati/Fast By Ferracci/Pro Grip/Dunlop-sponsored 955 gives chase.  Jamie James on the #2 Vance & Hines/Yamaha/Dunlop/Bell-sponsored YZF750 follows, along with Mike Smith on his #68 American Honda/Smokin' Joe's Racing/Dunlop/Pro Honda Oils-backed RC45, 3-Time AMA Superbike Champion Fred Merkel on the #27 Muzzy Kawasaki/Dunlop/Motul/SBS-sponsored ZX-7R, Dave Sadowski on the #25 Desmo/FBF/Dunlop/RK-sponsored Ducati 955 and Thomas Stevens on his #11 American Suzuki/Yoshimura Racing/Dunlop/NGK-backed GSX-R750.  Also keeping things close are Kevin Magee on the #23 American Honda/Smokin' Joe's Racing/Dunlop/Pro Honda Oils-sponsored RC45, Tiger Sohwa on the #41 Muzzy Kawasaki/Dunlop/Motul/SBS-backed ZX-7R and Colin Edwards on the #45 Vance & Hines/Yamaha/Arai/Dunlop-backed YZF750.

In what would come down to James' losing the series title to Corser at the season finale by mere points due to a mechanical, pundits could point to the outcome of this race as being the true culprit in James' failure to secure his second premier championship after having won the title riding for Yoshimura Suzuki in the '89 season.  With a handful of laps to go, James' team mate Edwards threw it away on the outside of 14, with the battle having whittled down to the two Yamaha and two Ducati factory pilots, with Merkel trying his best to keep them honest.  With the waving yellow being presented on the lap after the crash for the field, leader Picotte was passed by James coming out of 14 for the run up the hill.  But the AMA officials ruled that since no passing is allowed under those conditions, James pass was voided and his failure to meet the black flag for a stop-and-go meant he was eventually relegated down the field in the final results.

With the great finale in the 2011 version of the AMA Superbike Championship coming down to the final event of the year at New Jersey Motorsports Park, Cycle News.com's Larry Lawrence talks about some of the other close finishes in the premier road racing series in America over the years in this week's 'Archives' column in the Digital Edition of CN.  Read on as one of the best in the sport takes us for a trip down memory lane as he talks some of the closest finishes over the years in the AMA Superbike Championship Series: