With just four rounds left in the 2011 edition of the AMA Pro Flat Track Harley-Davidson Insurance Grand National Championship Series season, it is past the point of getting off the train before the season's end, as this missile is rolling along as only The Rolling Thunder Show can, and in the midst of the steam coming off the exhaust as it chugs into the western sunset are three riders who have established themselves as the championship contenders.

The first of those four rounds convenes tomorrow afternoon at the infamous Sprint Car Capital of the World in Knoxville, IA., where the remaining contenders in the championship hunt, and the rest of the contestants in the best racing show on wheels, head to one of the altars of racing in the midst of the cornfields and cattle farms of Marion County, Iowa.  And for the first time in over a dozen years, AMA Pro Flat Track will hope to do something that they were unable to do in last year's initial return to the county seat, which is run a race.  Due to inclement weather, last year's round was initially postponed until Sunday, where it was eventually canceled due to even more rain.  And as a result fans, teams and sponsors were denied a chance to see the return to the track of the AMA Grand National Championship Series at the world famous facility.

That should all change tomorrow, as the men and women of the AMA Pro Flat Track Harley-Davidson Insurance Grand National Championship Series unload and prepare to do battle in the midst of one of the closest and most hotly contested championship battles in years, if not decades.  And the three riders taking the title hunt to Knoxville are all equally poised in their own right to add more credence to his chances for grabbing that #1 plate for the 2011 season.  Those three riders blaze a trail at close to 140 mph heading towards turn one at Springfield in the shot above from last Sunday during the National main event, and make up our leaderboard for the 2011 AMA Pro Flat Track Grand National Championship.


Season-long championship point leader Sammy Halbert has shown all year he has what it takes to win races, keep the points lead, and open the doors for flat track fans with his series' leading media onslaught.  On and off the track the #7 Kings Kustoms/White's H-D/LZ Racing/KK Supply-sponsored and H-D XR750-mounted rider has led the field the entire season, winning on short track, TT and half-mile tracks, never relinquishing the point lead and getting the news out to the media and the fans on his program and on AMA Flat Track competition overall.  Sammy only has one finish this season out of the top 8, but don't look for another bogey on his part in the season's final four rounds.  Sammy again leads the points heading to tomorrow night's main event with 298 points on the season.

The man who hadn't won a race in almost four years before the end of May, but who showed the most overall consistency over the course of the last three seasons and win the '09 Twins Series Championship, finally hit the top of the box at the Springfield Mile I in late May.  And he has been on quite the roll since then.  Jared Mees and his #9 Rogers Lake Racing/Screamin' Eagle/Saddlemen/Lucas Oil-backed XR finally won another race and has been on a tear since with another pair of wins at Hartford and Lake Odessa to go along with his initial Springfield triumph.  Enough to hold a big lead in the Twins Series Championship, and also enough to move himself and his Brent Armbruster-tuned machines to within 5 points of overall leader Halbert, with 293 points.

Jake Johnson is the quiet one of the bunch, and for the better part of his career has followed that mantra to lead him to two Singles Series Championships, and the '10 AMA Grand National Championship.  The #1 Zanotti Racing/Schaeffer's H-D/Boughner Racing/Arai-sponsored and XR-mounted rider has kept the other two riders honest throughout the entire season, in spite of 'only' winning two Singles Series events on the year, and not yet bagging a Twins Series win on his Ted McDermott and Mike Hacker-prepared machines.  Jersey Jake knows what it takes to win a championship, and for the last few years has also come on stronger towards the end of the season.  And with 288 points to keep him within 10 of Slammin Sammy and within 5 of Jammin Jared, look for more top stuff out of one guy you never count out at any dogfight.  Let alone you never count out the guy WITH the #1 plate.

DAYTONA BEACH, FL (September 7, 2011) - In a quick turnaround from Springfield, Illinois' big Labor Day weekend doubleheader, the AMA Pro Harley-Davidson Insurance Flat Track Championship now heads west for Iowa's September 10 Knoxville Raceway half-mile. Knoxville's oval is sacred ground in the Sprint Car world -- the Sprint Car Hall of Fame sits outside Turn 2 -- but the venue is no stranger to national flat track racing, which has visited periodically since 1995.
While last year's Knoxville event was rained out, the hiatus has only upped the excitement for the series' 2011 return, which brings with it a heated, three-rider battle for the coveted number-one combined plate. As teams roll through the Iowa corn fields and into the hallowed venue, they'll deliver a championship chase in which the top three riders are separated by a mere ten points. 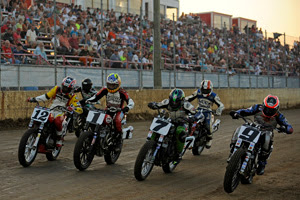 The Dash for Cash event in the AMA Pro Flat Track Harley-Davidson Insurance Grand National Championship Series is a very hotly contested bonus round that highlights the advantages of finishing 1st and 2nd in your heat race at each and every venue the series visits.  With $1K and 5 bonus points up for grabs for the 4-lap event, you can do the math to figure what kind of finishes will predicate who is in the title fight at the end of the year. 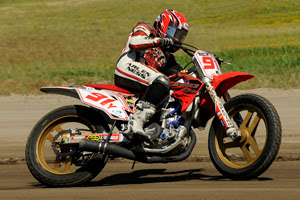 AMA Pro Motorcycle-Superstore.com Pro Singles points leader, Californian Mikey Martin, rolls into Knoxville with a 16-point lead. Both of his main challengers had major problems at the Springfield Mile-Gerit Callies suffering a scary front-straight get-off, Mikey Avila getting caught up in a last-lap crash-and with Martin's Weirbach Racing team based nearby in Iowa, hometown advantage at Knoxville has to go to the Weirbach crew.


Both Callies and Avila have declared their intention to rebound at Knoxville, but another Pro Singles riders to watch is Briar Bauman, who's quickly making his mark in the class. After turning 16 and earning his Pro license just weeks ago, Bauman has consistently run up front, climbing all the way to a tie for eleventh in just five races.

For Knoxville Raceway tickets and information, visit www.knoxvilleraceway.com or call 641-842-5431. To learn more and to be a part of the AMA Pro Harley-Davidson Insurance Flat Track Championship, visit www.amaproracing.com and join us on facebook.com/AMAProFlatTrackSeries and twitter.com/AMAProFlatTrack.