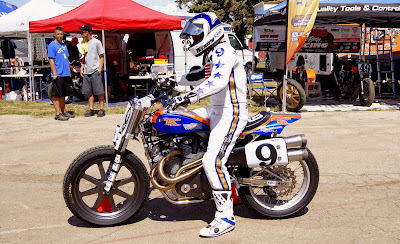 Jared Mees rolled off and out of the truck at the Springfield Mile II last Sunday with a retro Gary Nixon gear set that absolutely rocked the pits at round 16 of the 2011 AMA Pro Flat Track Harley-Davidson Insurance Grand National Championship Series season.  In carrying on the tradition of the #9 plate, which Nixon made famous after he won the '67-'68 AMA Grand National Championships, and later worn by 3-Time AMA Grand National Champion Jay Springsteen, Mees' homage to the passing of a hero just over a month ago was worthy of a champion in itself, and IMHO looked damn bitchin' and he was REAL easy to spot all day long, too!

What was a very nice gesture and a super-look for the '09 AMA Pro Flat Track Grand National Twins Series Champion,  Mees took his #9 Rogers Lake Racing/Blue Springs H-D/Screamin' Eagle/Lucas Oil-sponsored and Brent Armbruster-tuned H-D XR750 to the win in the Dash event (and a new Tissot Nicky Hayden replica watch) and the 5 point bonus.  Coming home 5th on the day in the National main event on the wild, windy and worthy venue that is the Illinois State Fairgrounds mile oval, Mees now sits 5 points back of series' overall point leader, Sammy Halbert.  Hmmm, are we seeing a pattern of '5's going on here....

Mees and the Rogers Lake team head to the Knoxville Raceway Half-Mile in Knoxville, IA. on Saturday, and look to saw some more points off of Slammin' Sammy's lead in the series.  If Jammin' Jared comes away with the results he did earlier in the season in winning Hartford and Lake Odessa, those 5 points could be history.  With just four rounds left in the 2011 AMA Pro Flat Track Harley-Davidson Insurance Grand National Championship Series season, look for Mees and the rest of the contestants in The Rolling Thunder Show to take it down to the end at Pomona in October.

Jared Mees checks in with his #9 Rogers Lake Racing/Blue Springs H-D/Screamin' Eagle/Lucas Oil-sponsored team from the weekend that was at the Springfield Labor Day Weekend doubleheader.  And check out his bitchin' retro Gary Nixon gear.  Awesome!

Over the years the Short Track has always been pretty tough for me. Going into this weekend I knew it could be almost make or break. The two-day racing could really pack away some points. If you get some momentum rolling you can just carry it on. The May Springfield race was almost picture perfect.

This short track was smaller than it has ever been. Flat, which I liked and made for better racing, but very tight in turns 3 and 4. Qualifying did not go that well for me, but what else is new!! We made some changes and at least I was in the front row for the Heat. I got a good jump and was up to 2nd but Brad Baker got around me, pushing me back to 3rd. I really wanted to be in the Dash for Cash because the points race is getting tight. So we made some more changes for the Main Event… hoping to take us to the next step. Well, sometimes you go forward and sometimes you go backwards. 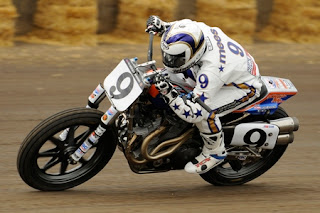 The Mile was the next day and I couldn’t wait to get out there again. This place is so much fun. I did something really special to honor Gary Nixon, who recently passed away. I had Speed and Strength make me up a really cool all-white set of leathers with the gold and blue Nixon used to run, and Troy Lee Designs paint me a Nixon Star helmet just like he used to wear, all in his colors. I can’t thank Speed and Strength and Troy Lee Designs enough for working hard to get it all done in time. They actually had it ready to go for Indy but since it was cancelled, we show-cased it at Springfield. It was an honor to wear Gary Nixon’s colors and I really enjoyed doing it.

I felt good in practice. The qualifying put me in another tough Heat race: Willie McCoy, Chris Carr, Jake Johnson, Brad Baker, Jethro Halbert and myself on the front row. Note that the first three ended up on the podium after the Main Event. I got a good start and was dicing it up with the guys back and forth. On the white flag lap I led it going into turn 3, pushed it in there hard, and came off turn 4 with the lead and won the Heat. It felt good to win this Heat with what could have been the front-row riders in any Main Event.

For the Dash we did not change a thing. I got off to a good start but did not have the traction I had before. I couldn’t get going and suddenly it came right in and bang! — I was in front. I was getting ready to draft by Carr and noticed his bike was missing and spitting. I went around the outside of Carr and Sammy went up the inside. I drafted Sammy at the line for the Dash win. I want to thank former GNC Rider Tommy Duma who donated a Nicky Hayden watch from Tissot to the winner of the Dash for Cash. I have always admired and wanted one of these watches and to earn it this way made it special. Nicky Hayden is like Rocky Balboa. He is an American Hero. To a flattrack racer this award has special meaning and is greatly appreciated.

For the Main Event we again did not make any changes as the bike felt great. I got off to a good start and was behind Johnny Lewis, dicing with him, but got trickled back to about 7th. The pace was very fast and as to the draft, if you were 3rd on back you couldn’t sling shot by anyone. You would go to pull out and you couldn’t go by. It was tough. Sitting in 5th place, there was a red flag with 5 laps to go. On the staggered re-start we got going and got up to 2nd on the last lap. But Carr came up and drafted by, putting me in 3rd going down the back stretch. With the draft, Willie made a really smart move and Johnson and Kenny Coolbeth went by. I ended up 5th. I was disappointed for sure as I had been fast all day, but made a couple of bad decisions in the Main. Good thing I did not lose much in the points race for the Championship. Going into this weekend I am only 5 points out of the Championship lead!


Thank you to all the fans and sponsors for the great support.