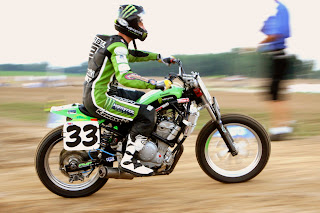 JR Schnabel #33 rolls out for his semi race at the Lake Odessa, MI. I-96 Speedway Half-Mile, round 11 of the 2011 AMA Pro Flat Track Harley-Davidson Insurance Grand National Championship Series.  The Monster Energy Kawasaki/Werner-Springsteen Racing/Cedar Creek Motorsports/Wossner Pistons/Millenium Technologies-sponsored and Kawasaki 650R-mounted rider signed with the team over the winter break between the 2010-2011 seasons, and was thought at the time to be a great addition to the team in terms of his experience in setting up machines and overall ability on the track.

For whatever reasons that transpired, Schnabel was never able to come to grips with the Twins Series machine after having been a Harley-Davidson XR750 and Suzuki pilot for the better part of the last 16 seasons on the schedule.  JR and the team failed to qualify for several rounds over the course of the season, and his best overall finish was on the team's Singles Series bikes at the Springfield TT in late May, where he won the Dash event and came home 3rd on the podium behind event winner Jake Johnson and runner-up Jared Mees.

Even when adding 2nd rider Shaun Russell, the extra input to the team never seemed to help the long-time standout on the series in terms of coming to terms with the higher-revving machine, and seemed to leave him searching for the right answers and set-up on the team's mounts.  JR intends to take this time off from the schedule to re-evaluate his situation and looks to return for the 2012 season at this point.

Cycle News.com's Larry Lawrence broke the official story the other day about JR Schnabel's announcement that he would be stepping aside for the remainder of the 2011 AMA Pro Flat Track Harley-Davidson Insurance Grand National Championship Series the other day.  Word was traveling rampant through the pit area at the Peoria TT 13 days ago that JR had left the team.  Being strictly rumors, the official word was yet to come.  The Werner-Springsteen Monster Energy Kawasaki team fielded rider Shaun Russell #28 at Peoria (as it had been doing so since his signing with the team before the spring rounds at Springfield) and are reported to be doing so through the remaining schedule for the 2011 season.

Check out LL's story here, along with a nice sound bite that LL has thrown in talking with JR on the phone from earlier this week.  JR will be missed around the track because of his competitive nature, as well as his overall likeability on AND off the track.  We wish him the best and look forward to his hopeful return in the 2012 season!