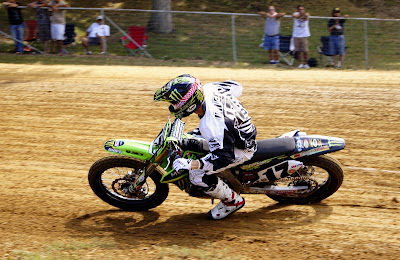 Henry Wiles shows the form that earned him and his #17 Monster Energy/Jones Bros./Don's Kawasaki/Shift Racing-sponsored KX450F his 7th win in a row at the Peoria TT during qualifying for round 14 of the 2011 AMA Pro Flat Track Harley-Davidson Insurance Grand National Championship Series on Sunday, August 21.  The 2-Time defending Singles Series Champ came back from knee surgery in late April to again show the rest of the entrants in The Rolling Thunder Show that he is a major force to be reckoned with on the infamous Peoria amphitheater track.

Check out Larry Lawrence's coverage of the Peoria TT below at Cycle News.com.

A big thanks to LL for putting up with me this year in our travels to four venues and seven races to see The Rolling Thunder Show put on the best show in racing on wheels in the world!

Kawasaki Racing filed this report of Henry Wiles' 7th win in a row at round 14 of the 2011 AMA Pro Flat Track Harley-Davidson Insurance Grand National Championship Series event at the Peoria TT: