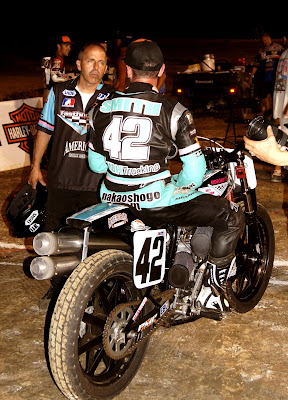 Bryan Smith talks with his Dad, Barry Smith, after coming home in 2nd place on his #42 Moroney's Fasthog.com/American H-D/Rockyonline.com/Boughner Racing-sponsored H-D XR-750, at round 11 of the 2011 AMA Pro Flat Track Harley-Davidson Insurance Grand National Championship Series in Lake Odessa, MI. at the I-96 Speedway Half-Mile event on July 23.  Smith, who has been knocking on the door of taking that top spot on the podium in all of the Twins Series events this year, finally got his breakout win for the 2011 season by leading 9-Time Sacramento Mile winner Chris Carr on his #4 American Motorcyclist Assoc. XR-750, across the stripe by the slimmest of margins, .042 seconds.


SACRAMENTO, CA (July 31, 2011) - An estimated 9,000 people cheered on a star-studded AMA Pro Harley-Davidson Insurance Flat Track field when the championship returned to the Cal-Expo Fairground's Sacramento Mile, and the sold-out, standing-room-only crowd was treated to one of the most dramatic wins in recent history. After twenty-five furious laps, Fasthog.com/American Harley-Davidson's Bryan Smith claimed victory over local hero Chris Carr (American Motorcyclist Association/Classic Harley-Davidson) by a margin of just .042 seconds. 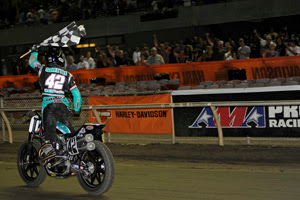 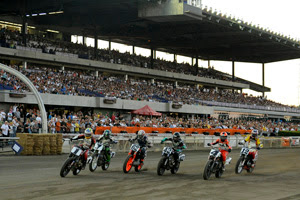 Jake Johnson #1 takes the early lead, and went on to win the Dash for Cash event at the Sacramento Mile, to collect another valuable five points in his quest to repeat as the 2011 AMA Grand National Champion.  Sammy Halbert #7, Luke Gough #62, Bryan Smith #42, Chris Carr #4 and Brad Baker #12 follow him into turn one. 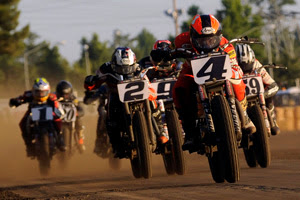 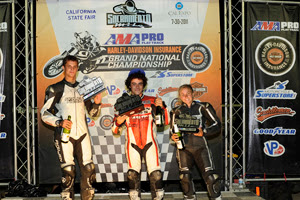 For Texter, who routinely got huge cheers from the crowd, it marked her first podium finish of 2011. Martin's win boosted his points lead over Avila to 16 with Weirbach Racing's Gerit Callies just another four back.


The series next heads to Washington's Castle Rock Race Park August 6 for the Castle Rock TT. For tickets and information, visit www.mshmc.org or call 1-888-71-TICKETS.
To learn more and be a part of the AMA Pro Harley-Davidson Insurance Flat Track Championship, visit www.amaproracing.com and join us on facebook.com/AMAProFlatTrackSeries and twitter.com/AMAProFlatTrack.

Thanks to AMA Pro Flat Track for this link to the results from round 12 of the 2011 AMA Pro Flat Track Harley-Davidson Insurance Grand National Championship Series, from the Sacramento Mile (standard version results with drop-down arrow):


Poppa Wheelie was in the house at the Sacramento Mile, and he filed this report on the race along with some great shots from the Cal Expo event:

And here is the link to Dave's official site, Flat Trak Fotos.com, which as of this writing has all of the results up.  Generally speaking, he'll have his full catalog of photos posted within a few days after each event, but with the west coast swing now heading to Castle Rock, it may take him a little longer.  Keep checking back to see some of the best, by the best:


Bryan Harley, with Motorcycle-USA.com, filed this report on the race at the Cal Expo Fairgrounds in Sacramento:

AMA Pro Flat Track announced last week that they would be 'Tweeting' the race to all Twitter fans (I've added the link on the left-side column) at the Sacramento Mile.  Well, they not only did that, but they added in a short video of some practice from the Cal Expo Fairgrounds.  It's a real short clip, but worth the look if for nothing else to hear the sounds of the bikes roaring by: