Tyler O'Hara on the #29 Tyler O'Hara Racing-sponsored H-D XR1200 leads the lead pack of riders with just a few laps to go in the inaugural AMA Pro Road Racing Vance & Hines XR1200 Series presented by Harley-Davidson Insurance event at the Indianapolis Motor Speedway this afternoon.  O'Hara kept it out front for the final run to the flag to beat out Steve Rapp by just .048 seconds after 10 laps of exciting racing at the Brickyard.

In what was a high-level energy event at the first of a two-race round this weekend, the XR1200 Series put on one heckuva show today that more then showed they belong on the undercard of the premier road racing series in the world at the World Capital of Racing.

The lead pack of O'Hara, XR1200 point leader Chris Fillmore on his #55 Bruce Rossmeyer's Racing/Revolution Performance-sponsored machine, Irishman Jeremy McWilliams on the #99 H-D of Bloomington/Indiana Biker's Choice-backed XR, Steve Rapp on the #5 Parts Unlimited/Vance & Hines-sponsored mount, and Daytona SportBike-regular Jason DiSalvo on the #40 Latus Motors Racing/RSRaceCraft.com-backed XR broke off from the 33 rider field early in the going.  Taking advantage of the large hole that the over-500 lb. machines punch through the air, the estimated 50K+ crowd was treated to what surely will go down as one of the most exciting races of any kind to run at the century old Indianapols track.  Needless to say, between the draft and the slick moves these riders were putting on one another ALL over the 2.6 mile track, it was quite the racing spectacle of who could make the move on whom throughout the 10-lap race, let alone where.

Swapping the lead too many times to keep count, the five-rider lead pack was slimmed down to 3 men when McWilliams and point leader Fillmore came together on the final lap of the 10-lap race.  Fillmore was the big loser on and off the track on this one, as his machine was too damaged to continue and was credited with 21st place, with McWilliams going down a couple of corners later, but able to remount to finish a very credible 10th.  Fillmore's lead in the point standings was whittled down to 6 points with Rapp's resulting 2nd place finish, after scoring a single point for what up until his crash was a very fine performance.

Meanwhile, Rapp, DiSalvo and O'Hara were having a battle for the ages on the final lap, just as they had throughout the whole race, with O'Hara taking a hard-earned and well-deserved win over Rapp by just .048 seconds.  DiSalvo was another .59 seconds back in what was all but a photo finish.  Rapp moved within striking distance of the championship as a result of his great run in 2nd and Fillmore's crash, after coming into Indy with a 30 point deficit.  With tomorrow afternoon's round and the final event of the season next weekend at NJMP, Rapp sits firmly in the catbird seat ready to pounce for the championship.

Tomorrow afternoon's event is scheduled to roll off at 3:30 PM EDT, and the weekend's events will be shown on SpeedTV tomorrow night at 6 PM EDT. 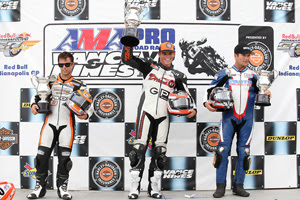 While O'Hara and Fillmore traded the lead over and over again -- O'Hara drafting by Fillmore on the Brickyard's long front straight, Fillmore answering back in the corners immediately after -- Rapp and McWilliams both signaled their intention to be podium contenders, with DiSalvo ramping up his own times as the laps clicked off. After sinking momentarily back to fifth, Rapp surged up to third and immediately engaged fellow 2011 XR1200 Championship contender Fillmore. McWilliams, however, wasn't inclined to sit back and watch -- he joined the slicing-and-dicing of Fillmore and Rapp and the trio headed into a corner three-wide. 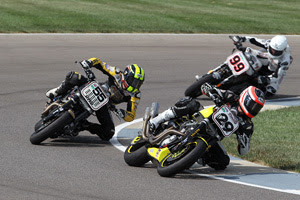 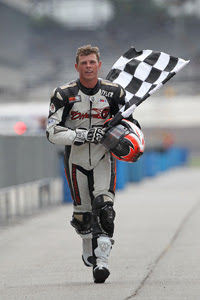 And a big thanks to Paul Carruthers, Editor of Cycle News.com's Digital edition, for chiming in with the story of the great race this afternoon at IMS that saw Tyler O'Hara win his breakout race in the XR1200 Series: