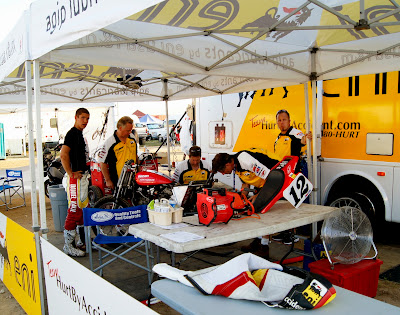 The 2011 AMA Pro Flat Track Harley-Davidson Insurance Grand National Championship Series season has seen it's share of action on AND off the track.  With the series now past the half-way flag of the season, with 13 of the scheduled 21-race calendar in the books, one thing that has been a constant in the series (as it has especially been the last couple of seasons) is the Lloyd Brothers Motorsports Ducati team.

The team, headed up by Ohio brothers Dave (sitting behind bike with laptop working on the final prep) and Mike Lloyd (bending over and checking out the rear of the Ducati machine) has held a large presence in the series since switching to the Ducati power plant before the 2010 season.  With former '00 AMA Grand National Champion Joe Kopp riding for the team that year, Smokin' Joe finally got the team it's first win in AMA Grand National Championship Series racing at the May Arizona Mile.  (Also pictured above at the Lake Odessa Half-Mile event in July 2011 are the team's crew chief, Dave Gamble, just to the left of Brad 'The Bullet' and team fabricator Lyle Pizzino, standing next to the team's transporter at right.)

Having been involved in AMA Flat Track for over 20 years, Dave and Mike have been some of the true innovators of the sport, in terms of equipment and safety, and have taken the Italian Ducati marque to another level in terms of being competitive in the series that has seen near-total domination over the course of the last 30-some odd years by the Harley-Davidson XR-750.  With the win at the Arizona Mile last year coupled with Joe's two other wins on the season, the former champ was able to finish 5th in the Twins Series Championship, and 2nd overall on the year.

But 2011 brought a new change, as Joe had already planned to hang up his steel shoe for the full-time grind on the series, and LBM was in need of a new charge to continue the upward curve of competitiveness that the team has been seeing with it's HyperMotard-based mounts.  In what was a great move by all parties, '09 AMA Pro Flat Track Pro Singles Champion Brad Baker was signed to ride for the team less then two months before the team's first outing at the Memorial Day Weekend Springfield Mile.

Baker (shown above giving Stu's Shots the 'w-t-f' look as he looks over the team as they ready the machine for the Lake Odessa round in July) proved right out of the box that his signing was no fluke in setting fast time and coming home 5th in his first outing on the Big Duc.  Since then, his and the team's results have been extremely solid, save for not making the show at Hagerstown in early July due to a bad throttle position sensor, and Brad sits in the 5th overall spot in the point standings, and 8th in the Twins Series point standings.

Unfortunately, the team suffered a set-back at the most recent Twins Series event at the return of the Sacramento Mile, when early in the day Brad and team suffered a set-back when the motor blew up on their primary mount.  Brad and the team regrouped on the back-up machine, and still came home with a solid 6th place finish in round 12 at the Cal Expo Fairgrounds, but also faced with having to rebuild the Big Duc before the series next Twins Series event at the Indy Mile, on August 27.  And with sponsorship dollars being tight, finding the money to rebuild the motor was going to be a struggle.

And this is where the story gets REAL good.  In steps '06 MotoGP World Champion and '02 AMA Superbike Champion, Nicky Hayden, to help the team foot the bill to get their number one machine ready for Indy.  The Kentucky Kid dug deep into his very own pockets to take care of the costs of rebuilding the motor for the Lloyd Brothers team and rider Baker.  Dave Lloyd told me over the weekend that (needless to say) he is a 'big fan of Nicky's' and that should he decide to do so again, has a bike to ride if he 'does some laps' at Indy this year again.

With Ducati not having any formal association with the team (which is a travesty!), Lloyd also said that Nicky 'would be welcome to ride the team's bikes anytime' and that he is a 'big fan of Nicky's' as well.  If you remember, the team set-up a bike for The Kentucky Kid to do his 'demo' laps on at Indy last year, and then auctioned off the number plate (signed by Nicky), along with a shot of Nicky at Indy that had been framed.  The proceeds of that auction went to the AirFence fund for AMA Flat Track, like what the team is doing this year with the raffle of the Buell.

So with Indy just 12 days off, the team is getting things together to be ready for the Lucas Oil Indy Mile round with the LBM/TeamHurtbyAccident.com/Foremost Insurance/ENI USA-sponsored #12 mount.  These guys will be ready, and you can bet, should Nicky decide he's ready to spin some laps at the home of the Indiana State Fairgrounds, that they will have a bike ready to roll for him. 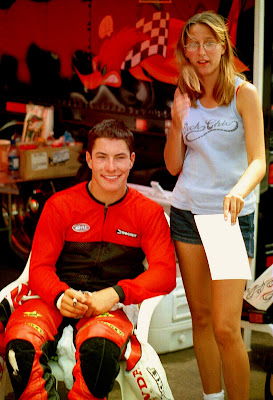 Nicky Hayden is shown posing with fans and signing autographs after the Mid Ohio AMA Superbike Championship Series race 2 in July 2001.  The young lady to the left of The Kentucky Kid is one of my best friend's (Tom Snyder-NOT the late night guy!) daughters, Brittany Snyder.  Needless to say, after getting his autograph and being able to get a shot of her with him, she was even a BIGGER fan of #69 after that day.  Brit hasn't been to a race in some time with us, but she always asks how Nicky is doing!

In a huge thanks to the former '02 AMA Superbike Champion and '06 MotoGP World Champion, Stu's Shots just wants to tip the helmet to a truly neat and great guy.  For Nicky to dig deep into his own pockets to help out the boys at Lloyd Brothers Motorsports in that way is REAL big, and REAL big of him, too.  This is the type of thing that keeps the flat track community such a close-knit family group, and for someone like Nicky to remember his roots and those that have helped him is very cool and shows you what kind of a person he really is--very thankful and appreciative of his up-bringing in the greatest show in racing in the world.

You can catch up with Nicky here by reading his account of testing the new track surface at the Indianapolis Motor Speedway from last week (thanks to IMS for this link!)  Nicky got the chance to ride a street bike on the newly paved surface at the World Capital of Racing last week, in preparation for the 4th Annual RedBull Indianapolis MotoGP round coming up on August 26-28.

And keep up with The Kentucky Kid here, thanks to his official website:

And if you are on Twitter, or if you just want to read some of the stuff that Nicky has been putting out there of late, check out #69's Twitter feeds here:

Here are some links you should be checking out having to do with the Lloyd Brothers Motorsports Ducati team in AMA Pro Flat Track.

And you can read more about 2011 AMA Pro Flat Track Rookie of the Year shoe-in Brad Baker, and his brother Scott, here via their Baker Boys Racing site (and you can hit them up on Facebook, as well!):

Make sure and take the time to check out the Lloyd Brothers Motorsports Ducati team's sponsors below.