AMA Flat Track: Jared Mees & Blue Springs H-D, Along with The Fast and Dirty.com Bring You Up to Date With Video From Lake Odessa Half-Mile 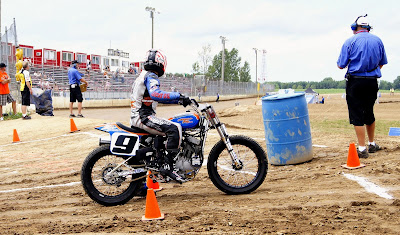 Jared Mees on his #9 Rogers Lake/Blue Springs H-D/Lucas Oil/Saddlemen-backed H-D XR-750 waits for the signal from AMA Pro Flat Track officials to get ready to roll out for practice at the Lake Odessa Half-Mile round at I-96 Speedway on July 23.  Round 11 of the 2011 AMA Pro Flat Track Harley-Davidson Insurance Grand National Championship Series saw The Rolling Thunder Show back for more action in the Twins Series, and the overall championship point standings get even closer for the top 3 candidates in the fight for the 2011 AMA Grand National Championship.

Mees and his Rogers Lake/Blue Springs H-D crew showed up with a transporter-load of pristine XR-750s, any which of the three would look to be ready for battle in the greatest show in racing in the world.  Moving back and forth between two of the machines, Mees ran solid all night starting with his 3rd qualifying spot, a 2nd place in his heat (behind winner and championship contender, Jake Johnson), and another 2nd in the Dash event (again, behind Dash winner Johnson.)  But come race time, Jared went to the front and in the end held off Bryan Smith #42 and Johnson for his third win of the season, and third in the last six races on the schedule.

Here's the link to Jared Mees, Blue Springs H-D and The Fast and Dirty.com's video from round 11 at I-96 Speedway in Lake Odessa, MI.  Also I included their intro to the video from the link at You Tube.com, as you might miss the write-up to the great footage!  Thanks to Will and Yve at The Fast and Dirty.com for putting together another great round of action and updates from the 2011 AMA Pro Flat Track Harley-Davidson Insurance Grand National Championship Series.


From The Fast and Dirty.com:

"Watch to find out how Jared, team members Brent Armbruster and Steve Beattie, and their Blue Springs Harley-Davidson's handle the high banking of the I-96 Speedway in Lake Odessa, Michigan. Jared Mees rides his Blue Springs Harley-Davidson XR750 to the limit, battling National Championship rivals wheel to wheel in his quest to earn his second #1 plate. Subscribe to BlueSpringsHD1's YouTube channel and follow all the action from every twins race for the entire 2011 Season.

Blue Springs Harley-Davidson, located in the greater Kansas City, Missouri area, has a long-time association with professional motorcycle racing, both in the AHDRA Drag Racing Series with Danny Worth and the AMA Pro Flat Track Series.

Jared Mees and Blue Springs Harley-Davidson won their first Grand National Championship in 2009, and they are fighting every round to earn the #1 plate again in 2011. BlueSpringsHarleyDavidson.com

Flat Track is America's original motorcycle sport, and a fledgling Harley-Davidson established itself by winning races on board track ovals in the 1920's. As speeds topped 100mph, the races were moved to dirt or flat ovals, marking the birth of Flat Track as we see it today. The AMA Grand National Championship series was established in 1954, and Harley-Davidson has been the dominant manufacturer for nearly half a century, winning 45 of 57 GNC Titles. To find more information go to AMAProRacing.com/​FT/​Events and find a race near you where you can meet Jared Mees and watch the Blue Springs Harley-Davidson XR750 in action."


Thanks again guys for this great re-cap of action from Lake Odessa!