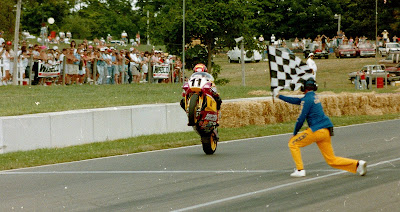 Thomas Stevens takes the checkered flag on his #11 Vance & Hines/Dunlop/Bell/Wiseco-sponsored Yamaha YZF750OW01, and wins the Wiseco Superbike 100 at the Mid Ohio Sports Car Course in August 1991.  Stevens led Miguel Duhamel on the #97 Camel Commonwealth Honda RC30 home, followed by Tom Kipp on his #16 Wiseco Yamaha OW for the main event win as part of the AMA Superbike Championship Series stop at the Camel Super Cycle Weekend in Lexington, OH.

After seeing team mate Jamie James on the #2 V&H Yamaha crash out of an early lead to bring out a red flag, Stevens used the re-start to his advantage, as well as the attrition of others in the field, to earn his first and only premier class win, and spring boarding him to the '91 AMA Superbike Championship.  With only 8 or 9 events on the '91 calendar, Stevens rode a solid and consistent year to win the grand prize.

After having ridden for the Vance & Hines team for two seasons, Stevens took the #1 plate to Muzzy Kawasaki for the '92 season, as a team mate to Scott Russell.  He returned to ride for the Vance & Hines team in late '96/early '97 to ride the team's Ducatis when they took over the running of the Italian marque in the AMA Superbike Championship Series, and rode for them through the '98 season.

Dean Adams has this great story about '91 AMA Superbike Champion Thomas Stevens' quest to find his championship winning Vance & Hines Yamaha YZF750OW01 over at his SuperBikePlanet.com site.  It has some interesting info on the machine and some more background on it, as well.

Maybe you can be the one to help out a great former champ find a piece of the missing puzzle!

(Should you know or come across the whereabouts of this historical machine, you can e-mail me here at stuman714@yahoo.com and I will see to it that the info gets passed on to Dean so he can contact Thomas.)