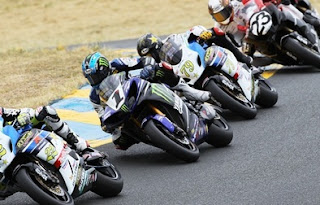 The September 2–4 New Jersey Motorsports Park finale will ultimately decide who’s handed the larger-than-life $2,000 Cortech Fast Man Standing check at the AMA Pro Road Racing Awards Banquet, which will be held at The Piers Shop at Caesars in Atlantic City. The round will also establish new class champions in AMA Pro Road Racing’s four exciting divisions, each of whom will be officially crowned the following night.

For more information about Cortech and Cortech products, visit www.cortechperformance.com. To experience Live Timing & Scoring presented by Cortech, visit www.amaproracing.com or download apps for iPhones and Androids from iTunes and the Android Market, respectively.

New Jersey Motorsports Park tickets and information are available at www.njmp.com and by calling 856-327-8000. To learn more and be a part of the AMA Pro Road Racing Series, visit www.amaproracing.com and join us on facebook.com/AMAProRoadRacing and twitter.com/AMAProSBK.