INDIANAPOLIS, IN (August 28, 2011) - After suffering heartbreak in yesterday's AMA Pro Vance & Hines XR1200 presented by Harley-Davidson Insurance Race 1, Chris Fillmore -- who crashed out, and out of the points, after Jeremy McWilliams made contact -- took his revenge on the field with a determined victory in Race 2. Finishing ahead of his closest championship rival, Steve Rapp, Fillmore crossed Indianapolis Motor Speedway's famous Yard of Bricks with a margin of just .169 seconds after a race-long duel. Yesterday's race winner, Tyler O'Hara, finished third. 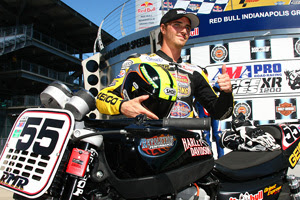 Taking his second runner-up position in as many days, Parts Unlimited's Rapp diced furiously with Fillmore and O'Hara through each lap of the ten-lap race. "I tried [to win] from the front yesterday," said Rapp, "and the only thing different today was that I tried from second-place and it was the same result. It was a good race today; it was nice that it was just me and Fillmore at the end just going for it. I was definitely faster going through Turns 5, 6, 7 -- I could make up all the time on him there -- but the straightaways were tougher." 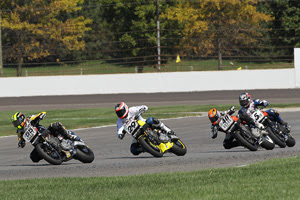 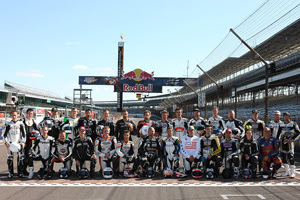 And thanks to AMA Pro Road Racing for this link to the results from race 2 at Indy from yesterday afternoon:

And also from AMA Pro Road Racing, this link to the complete event results from IMS (PDF versions):