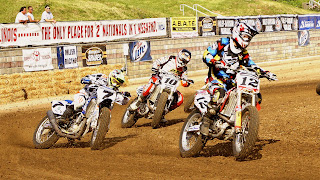 Round 7 of the 2011 AMA Pro Flat Track Harley-Davidson Insurance Grand National Championship Series at the Springfield TT started off about 48 hours late over the Memorial Day Weekend.  In what was supposed to have been round 6 on the 2011 calendar on Saturday May 28, the race was postponed to Monday May 30 after the Springfield Rodeo Arena was deluged with massive walls of rain and hail stones the size of canned hams (okay, maybe golf balls, but, you get the drill!)

In this great mid-pack battle during the final event at the Illinois State Fairgrounds, Sammy Halbert #7 has his eye on the competition while riding his Woody Kyle Racing/Fredericktown Yamaha/AGV/Kings Kustoms-sponsored Yamaha YZ450F.  Locked in a great battle that saw Slammin' Sammy being forced to start from the back row in a red flag-interupted event, the Washington State rider carved his way through the 19 rider field, to earn a hard-fought and well-deserved 5th place finish, to further hold onto his overall championship point standings lead that he has held since the beginning of the year at Daytona.

Leading at this moment on the #12 EBC Brakes/Arai Helmets/CP Carillo/Motion Pro-sponsored Honda CRF450 R is outstanding Rookie of the Year candidate Brad Baker.  The Bullet would go on to finish 9th on the day at Springfield after having to win his semi race #2 in order to qualify for the National main event.  Baker's quest to win the Rookie of the Year title in the 2011 season is all but sewed up, after having won the '09 AMA Pro Flat Track Pro Singles Championship, and finishing in the runner-up spot behind '10 Pro Singles Champ, Jeffrey Carver, Jr.

With the dirt flying and temperatures climbing as the day went on, Johnny Lewis on the #10 Scott Powersports/Dubach Racing Developments/Saddlemen/Triple J Racing-backed Honda CRF450R tries to keep the duo close while in route to a 13th place finish on the day, after also coming out of his semi race in 3rd to qualify for the show.  Lewis' ability on a 450 Singles Series machine wasn't quite as prevalent at Springfield, but he should be more then primed and ready by the time the series hits Peoria in nine days.


Last weekend, Sammy and fellow Washington State resident Brad Baker headed home to show the rest of the field in the AMA Pro Flat Track Series just what the heck these fellows do up in the Great Northwest, at least when they aren't racing.  Obviously, racing would be it, as Sammy ran away (three times due to red flags in the main alone) and Baker came home in 3rd behind Jared Mees to make it a Castle Rock TT Northwest sandwich.  In all seven riders out of Washington made the main event in the 19 rider field, and part-time racer and former Grand National Champion Joe Kopp #3, set fast time on the night and finished 5th after not having contested the series since the Daytona rounds in March.

Obviously there is something in the water in the Great Northwest that sets these riders aside from some of the regular contenders of the series in finishing so well on the day.  The only mark your overall championship series point leader missed all day was in not setting fast time, but Slammin' Sammy still qualified in the 2nd spot on the evening behind the returning Kopp, and went on to win the fastest heat of the night (which put him on the pole for the main) and winning the Dash for Cash event, again over Mees.

Thanks to Miriam Deitcher and her Facebook Flat Track Live, for this great video of the highlights from round 13 of the 2011 AMA Pro Flat Track Harley-Davidson Insurance Grand National Championship Series calendar, at the Castle Rock TT in the great Northwest State of Washington: