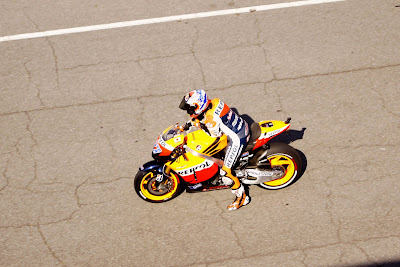 Casey Stoner rolls down pitlane during free practice session #3 at the RedBull Indianapolis MotoGP round at the Indianapolis Motor Speedway on Saturday, August 27.  The Australian again showed the field at Indy this year that he is on top of his game in leading the fastest practice session of the first day of on-track action on his #27 Repsol Honda RC212V, and backed it up by leading the 3rd session this morning, and then decimating the field by over .5 seconds to win his 7th pole of the 2011 season.

The '07 MotoGP World Champion showed the way this afternoon and set his fastest time on lap 22 of 25 laps turned in the qualifying session, laying down a time of 1.38:850 to take pole over Texan Ben Spies on the #11 Yamaha Factory Racing M1 by .523 seconds.  Defending 2010 MotoGP World Champion Jorge Lorenzo on the #1 Yamaha Factory Racing M1 was another .256 seconds back of team mate Spies to round out the front row.

Casey Stoner is on a roll in 2011 and is well on his way to what could be his 2nd MotoGP World Championship.  The Repsol Honda rider led the 17 rider field this afternoon in qualifying, and dusted the competition while doing so to set a new track record at the recently repaved Indianapolis Motor Speedway road course, in preparation for tomorrow afternoon's 4th Annual RedBull Indianapolis MotoGP round 12 race.

Ben Spies on his #11 Yamaha M1 ended up in the middle of the front row, .523 seconds behind pole man and championship points leader Stoner, with fellow Americans Colin Edwards on the #5 Tech 3 Yamaha qualifying in the 6th position, and Nicky Hayden on the #69 Ducati ending up in the 8th qualifying position.  9-Time World Champion Valentino Rossi struggled during the afternoon qualifying session on his #46 Ducati, setting in the 16th spot throughout the 60 minute session, and with less then 10 minutes left managed to qualify 14th on the grid.

Reliable rumors have it that tomorrow IMS and Dorna will officially announce that the RedBull Indy MotoGP round will return for the 2012 season, as not only were the crowds strong today, but the MotoGP folks are very happy with the recently repaved track.  This is great news for the East Coast fans not wanting to have to travel to Laguna Seca, or for that matter to Texas in 2013, to see a premier road racing event.  Indy's dedication to keeping the MotoGP round here at the infamous Brickyard looks to have paid off with the announcement expected during tomorrow's events.

Here is the link to the complete results in the qualifying session at the 4th Annual RedBull Indianapolis MotoGP round thanks to MotoGP.com:

And you can read the story of the qualifying session at Indy here:

Repsol Honda released this press release via MotoGP.com on the story of the afternoon at The Brickyard as Casey Stoner led all comers in the mid-afternoon qualifying session for tomorrow's 2 PM EDT race: