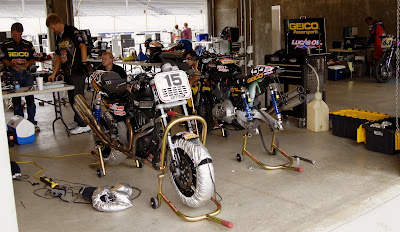 Chris Fillmore's #55 Bruce Rossmeyers Daytona Racing/Revolution Performance/Geico-sponsored H-D XR1200 sits in the team's garage in between the on-track action during the Indianapolis Motor Speedway's two-day test session on August 19 for the AMA Pro Road Racing Vance & Hines XR1200 Series presented by Harley-Davidson Insurance round at IMS on August 26-28.  Team mate Michael Corbino's #15 RMR/Bruce Rossmeyers Daytona Racing-sponsored XR1200 sits next to series point leader's Fillmore's machine with the tire warmers on, with Corbino relaxing just behind the #55 machine as the team works about the garage during the break.

Both Fillmore and Corbino had great results from the test session at IMS last week.  Fillmore led 2 of the 3 sessions he participated in, and finished 3rd in the Friday AM session behind Steve Rapp and Jason DiSalvo, while Corbino started off the 4 sessions over 16 seconds down on the field, and finished within just over 5 seconds behind the fast times laid down by Rapp and DiSalvo, and well inside the top 7 times laid down in the Friday PM session.  The Sarasota, FL. resident currently lies 7th in the series' overall point standings. 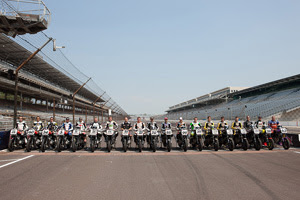 You can follow the on-track action at the Indianapolis Motor Speedway rounds of the AMA Pro Road Racing Vance & Hines XR1200 Series presented by Harley-Davidson Insurance via the link below to AMA Pro Road Racing's Live Timing and Scoring:

And here is the link to the complete event info at IMS for this weekend's doubleheader round during the RedBull Indianapolis MotoGP weekend.  This includes all entry info, track map and complete weekend schedule for August 26-28: