Sammy Halbert on his #7 Woody Kyle Racing/Fredericktown Yamaha/AGV/Kings Kustoms-sponsored Yamaha YZ450F leads this five-pack of riders during round 6 action at the Springfield TT in May 2011, during the Dash for Cash event.  Leader, and eventual Dash winner JR Schnabel on his #33 Werner-Springsteen Monster Energy Kawasaki is just ahead of 2nd-6th place as shown.

Following Slammin' Sammy dead center behind him is Jared Mees (you can't get much closer then this!) on the #9 Montgomeryville Cycle Center/Lucas Oil/Rogers Lake Racing/Saddlemen-sponsored Honda CRF450R, with eventual National event winner at Springfield, Jake Johnson on his #1 Zanotti Racing/Schaeffer's H-D/Motion Pro/Arai-backed Honda CRF450R.  Heat 2 winner Chad Cose on his #49 'no sponsor listed' Honda CRF450R takes the high wide line, while Matt Burton on the #39 RJ Performance/Hot Cams/39 Moto/MotionPro-sponsored Yamaha YZ450F brings up the rear.

Johnson and Mees finished 1-2 in the main event at Springfield, which was the last Singles Series event before the 2011 AMA Pro Flat Track Harley-Davidson Insurance Grand National Championship Series got into full swing in early June.  And with Sammy having to start on the back row at Springfield, and coming home in the 5th spot, the events of the day, needless to say, were quite exciting.

With the three riders locked in what surely will go down as one of the all-time epic battles in AMA Flat Track Series racing, the upcoming Castle Rock TT this weekend is sure to drum up some more excitement, something the series does at each and every stop on the calendar.  With hometown boys Halbert, Rookie of the Year candidate Brad Baker, and the returning to Castle Rock, Joe Kopp #3 all set to battle the best in the Washington State on Saturday night, there is no reason to believe that anything different will occur at the return of one of the iconic venues on the series calendar.


DAYTONA BEACH, FL (August 4, 2011) - When the AMA Pro Harley-Davidson Insurance Flat Track Championship visits Washington State's Castle Rock Race Park this Saturday, August 6, it'll mark yet another chapter in a history that dates back to 1965, when the facility hosted its first Grand National event. With help from the Mount Saint Helens Motorcycle Club -- which rebuilt the fairgrounds track after the 1980 volcanic eruption and has hosted nationals since -- the Castle Rock TT will also give several local riders a hometown, Pacific Northwest-style welcome. 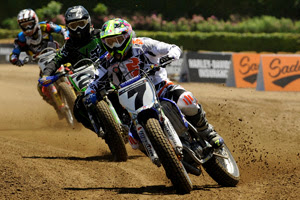 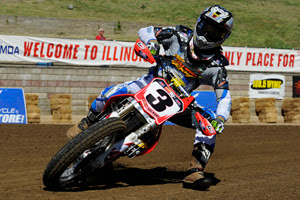 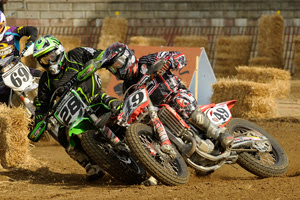 
With all of the championship battles so close, the ultra-tight racing of Castle Rock's TT has even more potential than usual to change the fates and fortunes of its riders, as even a small mistake can have big repercussions. The 2011 version of the Castle Rock TT will no doubt produce more of the surprises it's long been famous for.
For Castle Rock TT tickets and information, visit www.mshmc.org or call (888) 71-TICKETS. To be a part of the AMA Pro Harley-Davidson Insurance Flat Track Championship, visit amaproracing.com and join us on facebook.com/AMAProFlatTrackSeries and twitter.com/AMAProFlatTrack.