AMA Flat Track: Henry Wiles Takes His #17 Monster Energy Kawasaki to The #1 Spot at the Peoria TT for 7th Win in a Row 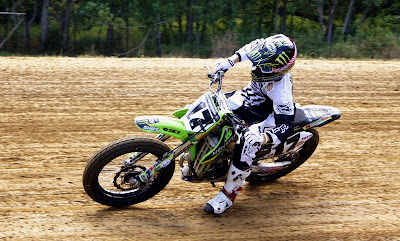 Henry Wiles showed his hand early in the day at round 14 of the 2011 AMA Pro Flat Track Harley-Davidson Insurance Grand National Championship Series at the Peoria TT in running 3rd in practice behind Jared Mees and Brad Baker.  After that, it was almost all Hammerin Hank on his #17 Monster Energy/Jones Bros/Don's Kawasaki/Arai-sponsored KX450F as he set fast time in qualifying and had the fastest heat race of the day, which put him on the pole for the National main event.

Jared Mees on his #9 Lucas Oil/National Cycle/Rogers Lake/Montgomeryville Cycle-sponsored Honda CRF450 R leads Sammy Halbert on his #7 Woody Kyle Racing/Fredericktown Yamaha/AGV/Kings Kustoms-sponsored YZ450F, with Jake Johnson on his #1 Zanotti Racing/Schaeffer's H-D/Boughner Racing/MotionPro-sponsored Honda keeping it close early in the 25-lap main event at Peoria on August 21.  The trio finished in this order behind winner Wiles, with Slammin' Sammy coming home 5.767 seconds behind Henry and Jersey Jake another 3.574 seconds in arrears of the #7.

Mees gained the most points on the day after leading Wiles home in the Dash event, with Johnson 3rd, Morton, IL. resident Rob Pearson #27 4th and Sammy finishing 5th, to gain the final point in the extra-dough and extra-points paying 4 lap event.  Sammy leaves Peoria with a slim 3 point lead in the overall championship standings behind Mees, with Johnson only gaining an extra point in the overall championship standings to make it Sammy 268 to Mees' 265 points, with Johnson now at 249 points.


The series now has the next weekend off due to the cancelation of the Lucas Oil Indy Mile, and next heads to the Labor Day Weekend doubleheader round at the Illinois State Fairgrounds on September 3-4.

PEORIA, IL (August 22, 2011) - Monster Energy Kawasaki's Henry Wiles came off the injured list to continue his winning ways at the historic Peoria Motorcycle Club Grounds, dominating the Peoria TT -- Round 14 of the AMA Pro Harley-Davidson Insurance Flat Track Championship -- to claim the seventh consecutive victory of his career at the popular TT track. The win didn't come as easily as some of his past versions, however, as Jared Mees (Lucas Oils/National Cycle/Rogers Lake Racing) forced Wiles to earn every inch of his advantage. 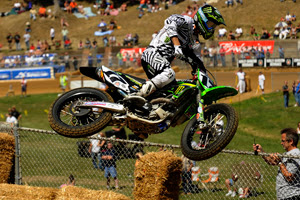 While Henry kicked off the race with a holeshot, there was plenty of action farther back in the running order, as Halbert and Mees exchanged second on Lap 4 and the battle for fifth was fierce. Rob Pearson (Matt Reecy Racing), Bryan Smith (fasthog.com), Johnny Lewis (Scott's Powersports), Matt Weidman (Snip/Shoei), Chris Carr (AMA/DFW Honda), and Kenny Coolbeth (Chaplin Kawasaki) all fought tooth-and-nail for the position, Pearson regaining it late in the race. Making the best of his final race at the challenging TT venue, the "Prince of Peoria," Chris Carr, slipped around Pearson briefly, but the local rider quickly charged back to hold Carr to a sixth-place finish. Weidman, Smith, Coolbeth, and Lewis filled out the top ten. 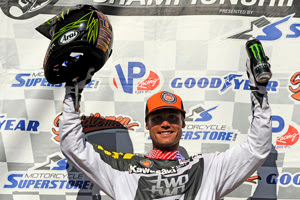 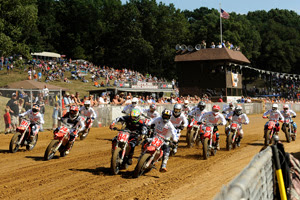 Despite Avila's five wins, he remains third in points behind Martin and Callies. The championship race between these three has narrowed to a fifteen-point spread.
The AMA Pro Harley-Davidson Insurance Flat Track Championship next heads to Springfield's Illinois State Fairgrounds for the Springfield TT on September 3, followed by the Springfield Mile II on September 4. Rounds 15 and 16 on the schedule add up to the best way for any flat track fan to spend the Labor Day weekend; for Springfield tickets and information, visit www.illinoismda.com or call (217) 753-8866 or (888) 468-1622.

Here's Larry Lawrence's story of the race at Cycle News.com.  A big thanks goes out to LL for letting Stu's Shots tag along to this great event:

And a big thanks to LL at his The Rider Files.com site for showing that Stu's Shots does occassionally get down and close to the action:

AMA Pro Flat Track has this album of shots from the Peoria TT thanks to official photographer Dave Hoenig:

And here's the link to Dave's official site, Flat Trak Fotos.com, where he has results and (soon to be posted) his full catalog of photos from the Peoria TT: