Sammy Halbert can be seen talking with his brother (and tuner) Andy, just before the start of heat race #2 at the Springfield TT round of the 2011 AMA Pro Flat Track Harley-Davidson Insurance Grand National Championship Series in May.  The #7 Woody Kyle Racing/Fredericktown Yamaha/AGV/Kings Kustoms-sponsored and Yamaha YZ450F-mounted rider stormed through the field on the Monday running of the Memorial Day Weekend event to garner a hard-earned 5th place in the final, after having to start at the rear of the field due to a red flag delay.

Since that time, Sammy has held a firm lead on the overall point standings in the series, and extended it AND his season win total last weekend by winning his 4th event of the year at the return of the Castle Rock TT to the series's schedule.  Sweeping the entire night, albeit for overall qualifying honors, the Washington State rider again showed that he is more then up for the count in his fight to garner a 'complete' AMA Grand National Championship.  (Fans will remember that Slammin' Sammy was honored with the 'mythical' Grand National Championship for the 2009 season by FlatTrack.com, and even though AMA Flat Track wasn't recognizing the overall at that time, still gifted him with a single-digit championship number for his efforts.)

Make no mistake about it, Sammy Halbert is on a mission in the 2011 season, and with eight rounds to go on the series' calendar, is poised for a run for that big number 1.  The series is off this upcoming weekend, and round 14 will hit the track at the annual visit to the Peoria TT on Sunday, August 21.

CASTLE ROCK, WA (August 8, 2011) - When the AMA Pro Harley-Davidson Insurance Flat Track Championship returned to Castle Rock for Saturday night's TT, it was Graham, Washington's very own Sammy Halbert (Woody Kyle Racing/Fredericktown Yamaha) who showed the field how it's done, leading every lap of the race on the way to a decisive victory in front of hometown friends and family. Montgomeryville Cycle Center/Lucas Oil's Jared Mees tried valiantly to dislodge Halbert but came up short at the line, while another local favorite, Brad Baker (Major League Moto/R3 Moto), showed his skills on familiar dirt to take third.
"I knew if I kept getting good starts and kept my focus, I could win this tonight," said Halbert, after claiming his trophy. "This is just great -- I won my first national here, and this is my fourth win this year, [which is] more than I had in my whole career starting the year."
Halbert wasn't phased by either of the race's two re-starts, the first coming after the ultra-tight field bunched at the initial jump, the resulting melee collecting Chris Carr, Johnny Lewis, and Bryan Smith. All riders were present for the second go, with Halbert, Mees, and Monster Energy's Henry Wiles repeating their solid starts to take over the top three positions. As the race approached the halfway mark, however, Chad Chose fell on the back section of the track, causing the second red to fly.
--------------------------------------------------------------------------------------------------------------------------- 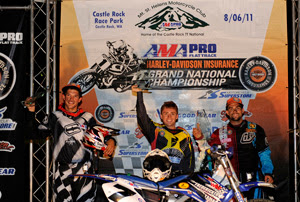 
After a short delay, Cose was able to rejoin the field for a 13-lap race to the finish. Any advantage gained during the first twelve laps was now lost, but Halbert remained unbreakable, Mees unable to find a way past him. Wiles, however, had his hands full with Baker, who ramped up the pressure on the Kawasaki rider until he was able to take third from Wiles just six laps from the end. The Rookie of the Year candidate was also closing on Mees when the laps ran out, but he was happy to claim his second podium-finish of the year in front of local fans.
Wiles crossed the line well ahead of a great battle for fifth between Joe Kopp (Latus Harley-Davidson), Jake Johnson (Zanotti Racing), and Kenny Coolbeth (Chaplin Kawasaki). The semi-retired Kopp was able to hold off defending Grand National Champion Johnson and Coolbeth to take the fifth-place spot in his first appearance in the series since the championship's opening Daytona round. American Motorcyclist Association/Dallas-Fort Worth Honda's Chris Carr finished just a click back in eighth after working his way past another local rider, Innovative Suspension's Scooter Vernon, who'd run as high as fourth early in the race before slipping to ninth. Matt Reecy Racing's Rob Pearson rounded out the top ten.
--------------------------------------------------------------------------------------------------------------------------- 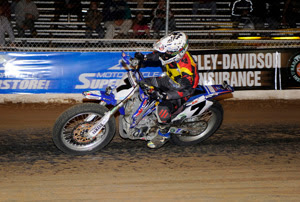 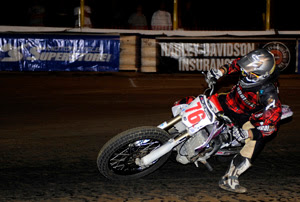 Martin's points lead is down to twelve over Callies, with Mike Avila -- who finished ninth after a heat race fall hurt his chances for the night -- another ten back in third. The Motorcycle-Superstore.com Pro Singles points race has become a three-rider battle, the rest of the field forced to watch Martin, Callies, and Avilia duke it out at the top of the standings.

Here's the story of the race at Castle Rock, thanks to Dave Hoenig and Cycle News.com's Digital Edition:

And thanks again goes out to Dave Hoenig, for his photos (to be posted soon!) and results from Castle Rock on his great site, Flat Trak Fotos.com: