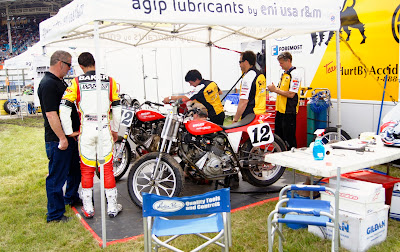 While team rider and AMA Flat Track Rookie of the Year candidate, Brad Baker talks with his Dad in the pit area, the rest of the #12 Lloyd Brothers Motorsports/TeamHurtbyAccident.com/Foremost Insurance/ENI USA-sponsored Ducati team members go about getting one of the team's potent HyperMotard-based mounts ready for Brad to take his first event laps of the day at the Springfield Mile I, on May 29.  Baker, in his first full year as an Expert-ranked rider (having won the '09 AMA Flat Track Pro Singles Championship), is more than proving the team's decision to sign him to ride their machine over the off-season was not a mistake...at all!

Brad 'The Bullet' had spent very little time on the machine before the first Twins Series event of the year at round 6 of the 2011 AMA Pro Flat Track Harley-Davidson Insurance Grand National Championship Series, but it sure didn't show when he set fast qualifying time right out of the box at the legendary and furiously fast Illinois State Fairgrounds mile oval.  Not long after, he backed that up in winning his heat-the fastest of the day-to garner the pole (and a spot in the points/cash bonus Dash event round) for the main event.  The Bullet would go on to finish 5th on the day in the National, in spite of fighting handling problems that plagued the team throughout the afternoon, and then came home 3rd in the Dash.

Since that great break-out weekend, five more Twins Series events have come and gone in The Rolling Thunder Show, and Brad and the team are holding strong in 5th place in the overall point standings.  Unfortunately, a faulty throttle positon sensor caused them to miss the main event at the Hagerstown Half-Mile last month, something team co-owner Dave Lloyd told me was the first time that had ever happened to them with the machine.

Besides Brad and his Dad, Kip (from left above), the other members of the LBM team hard at work include Kevin Atherton, former National #23, who is fueling the bright red Duc up.  Atherton has been acting as a rider/coach for the team's fine young rider, and has also been traveling with Brad to the Singles Series events to act as his pit crew.  And no matter what anyone says, if 'Cupcake' is in the house, it's gonna be a good, hard-racing time!  And everyone is going to be smiling along with him.

Dave Gamble (tan hat/partially hidden between bikes) is the team's head mechanic and parts fabricator.  After working for Rahal Racing in open wheel competition, team co-owner Dave Lloyd tells me he comes up with some really sweet pieces for the beautifully-prepared machines.

And last, but surely not least, is team co-owner Mike Lloyd, who is overseeing the work being put in on their LBM machines.


You owe it to yourself to take the time to check out one of the most impressive teams and layouts in the AMA Pro Flat Track Series the next time you are at an AMA Grand National Twins Series event.  Getting a chance to take a look at one of the teams that has been involved in AMA Flat Track racing for over 20 years, and see the ultra-sano equipment that they bring to the sport and to the track, will make you giddy (especially if you are a hard-core fan like I am, that appreciates the quality AND commaraderie shown by these guys!)  And the enthusiasm, professionalism, and all-around good vibe in their operation is evident every time the LBM hauler shows up and unloads. 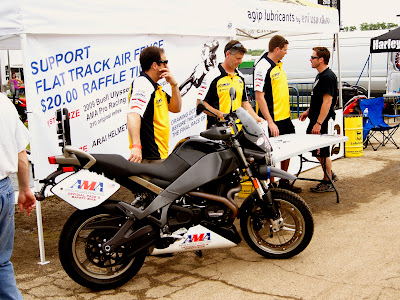 The Buell XB12XP that the team is raffling off at AMA Flat Track events this year sits on display at the Springfield Mile I during round 6 of the 2011 season, on May 29.  The LBM team unloads their race mounts for Brad, and rolls out this 2009 model Buell that was used as the pace bike during the '09 AMA Pro Road Racing season.  During the fan walk and throughout the day, the team will 'hawk' their goods in order to sell fans and friends alike a chance to win the bike, as well as help provide for the AMA Flat Track Airfence Soft Barrier Fund.  And, this IS the actual machine that some lucky winner will get to take (or hopefully, ride) home after the season finale drawing in Pomona on October 15.

Team members shown talking with the fans and paddock members above are Lyle Pizzino, the team's fabricator, and team co-owners Mike and Dave Lloyd.

LBM has been a long-time supporter and on-track presence in AMA Pro Flat Track Series racing, and have also been ahead of the curve in terms of safety for the sport.  Having been a supporter of the safety advances in motorcycle racing in general, the team gives back to the sport in many ways.

At the Indy Mile in August 2010, the team had a special Ducati HyperMotard-based #69 machine sitting in their pits for 2006 MotoGP World Champion and 2002 AMA Superbike Champion, Nicky Hayden to ride his 'demo' laps after announcing he would be continuing his contract with the Italian Ducati MotoGP team for another couple of years.  The Kentucky Kid went out and burned off some serious laps for the crowded house, and after taking his helmet off had a smile from Indy to his home in Owensboro, KY.

After the event, the LBM team took the number plate off the machine, and along with a photo taken of Nicky's Indy ride, had them mounted in a very nice frame-and of course, all signed by Nicky.  The team had it on display in their pit area at the Springfield Mile the next weekend, and then put it up for auction on eBay.com, again to raise more money for the AMA Flat Track Airfence Fund.  Class act, all the way around!

So don't despair, you still have nine more events in the 2011 season to get in on a truly one-of-a-kind raffle, that will not only net you a VERY nice low-mileage Buell machine, but you will also go down in history as being a donor to a VERY worthy cause--purchasing and repair of soft barriers.  Your donation/raffle entry is not only needed, but is appreciated and thought of by every rider and fan who has ever seen the worth of these extremely valuable safety tools.  And you might save a life!


Just over ten weeks are left to purchase a chance to win a one-of-a kind Buell Ulysses XB12XP and at the same time help support the flat track portion of the Roadracing World Action Fund.

Lloyd Brothers Motorsports, Inc. with support from Foremost Insurance Company, Arai Helmets, and AMA Pro Racing is running a very exciting fundraiser for the flat track portion of the Roadracing World Action Fund, a 501 (c) non-profit organization with a mission of reducing racetrack injurires by advocating and promoting the use of soft barriers, like Air Fence*.

To get a better understanding of what soft barriers do and why they are so important, go to:

The grand prize in the raffle is a 2009 Buell Ulysses XB12XP that was used as the official Pace Motorcycle during the 2009 AMA Pro Road Racing season.  The Buell, which has less than 210 miles on it, was donated by AMA Pro Racing.

"AMA Pro Racing is committed to the growth of flat track and safety is a major component of that process.  We are pleased the Lloyd Brothers team is taking the initiative in organizing this fundraiser to help repair existing air fence and purchase new new airfence," commented Dan Johnsen, Director of Flat Track at AMA Pro Racing.

The second-place prize in the raffle is a new Arai helmet donated by www.AraiAmericas.com.

Lloyd Brothers Motorsports came up with the idea and has been transporting the Buell to AMA Flat Track races across the country this season, promoting the fundraiser and selling raffle tickets.

"We are excited to help raise funds for soft barriers for use at flat track events," stated Lloyd Brothers Motorsports co-owner David Lloyd.  "Soft barriers are invaluable to the safety of racers.  We are really hoping that the flat track community will rally around this cause so that we can expand the amount of air fence availability for the safety of our racers."

Tickets are $20 each, and can be purchased at the following upcoming AMA Flat Track events:

For more information on any of these events, go to www.amaproracing.com/ft.

A website has also been set up by the LBM team where donations can be made via PayPal and credit cards.  A donation of $20 will receive a free entry in the raffle:

The winning tickets will be drawn and announced at the season finale October 15, in Pomona, CA.  Winners do not need to be present to win and will be notified after their ticket is drawn.