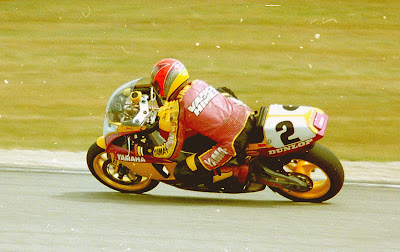 Jamie James on the #2 Vance & Hines/Dunlop/Bell/Bel-Ray-sponsored Yamaha YZF750 is shown after coming out of the old Billy Mitchell Bridge and making the run into the final turn 14 at Road America on his way to romping the field in the June '91 edition of the Coca-Cola Super Cycle Classic round of the AMA Superbike Championship Series.  James led team mate Thomas Stevens and Rich Arnaiz on a Commonwealth Honda home on the day at the four mile track located just outside of Elkhart Lake, WI.  It was James' first of two in a row at Road America, as he won the '92 event over Scott Russell on a Muzzy Kawasaki and Freddie Spencer on an Erion Racing Honda.

The likeable Louisiana resident was one of the main-stays in AMA Superbike racing from the late '80s into the late '90s.  Winning the '89 Superbike Championship over team mate Russell while riding for the Yoshimura Suzuki team, James headed over to ride one of Eraldo Ferracci Ducs for the '90 season.  James never seemed to come to terms with the Italian v-twin power, and jumped ship to the Vance & Hines Yamaha team in the '91 season as a team mate to eventual '91 Champ, Thomas Stevens.

Yamaha and Vance & Hines were THE big factory team in the early-mid '90s in AMA Superbike Championship Series racing.  Starting off with Dave Sadowski winning the '90 edition of the Daytona 200 in the team's first full year with Yamaha, they then went on to win several other National events with riders Jamie James #2 , Thomas Stevens #11 and Colin Edwards #45.  Edwards would go on to win his first National road race event riding for the team at Mid Ohio in '94, and would end up bolting to the World Superbike Championship Series (WSBK) for the '95 season.

Even the late Larry Schwartzbach had just won his breakout 600 Supersport race at Mid Ohio in July of '92 before he was tragically injured later that day in the Superbike final, only to succumb to his injuries some two days later.  Schwartzbach was just getting ready to make that next big step in the Superbike Series with the team in getting regular podiums before his Mid Ohio crash.

Thomas Stevens won the magenta and gold-colored team it's first AMA Superbike Championship in the '91 season, after having won his one and only event at that same year's round at Mid Ohio.  Stevens would leave the team after the end of the season and carry his knewly earned #1 plate on a Muzzy Kawasaki for the '92 season.  James won two Road America rounds in a row in '91-'92, along with several other races, and also won the '94 600 Supersport Championship while riding for Terry Vance and Byron Hines in a championship run that went down to the wire at the final round at Road Atlanta in September of '94.

James was also in serious contention for the '94 AMA Superbike Championship when his quest was thwarted with just a few laps to go and the bike went sour on three cylinders.  He would lose the championship to 'rookie' Troy Corser on a Ferracci Ducati by mere points.  (Some to this day say James would have won the '94 title if not for a yellow flag pass executed earlier in the season at the Road America round, when ironically, team mate Edwards crashed out of the final coming onto the main straight out of turn 14 in a battle that involved James, Edwards, Corser and Pascal Picotte on another Ferracci Duc.  James was penalized for passing Picotte for the 'race win', and was credited much further back in the field then he actually finished as a result.

The  team had super success in the series over the course of it's six or seven years running the Tuning Fork brand, after having campaigned Suzuki's in the series during the '89 season with somewhat lackluster results.  After Yamaha took the team back in house, V&H regrouped and came back with their powerhouse Ducati squads during the late '90s to early '00s, and again set the bar in the AMA Superbike Championship Series.

Here's a great little promo video featuring James, Edwards and Schwartzbach that was filmed during the team's '92 season, that someone posted over on YouTube.com.  It mentions Edwards in the title, but he has no track time and very little camera time in the short, 2 1/2 minute cut.  But it's a great ride down memory lane nonetheless!