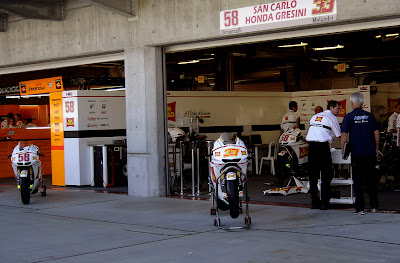 The San Carlo Gresini Honda RC212Vs of Marco Melandri #33 and Marco Simoncelli #58 are shown in various states of diplay and readiness at the 3rd Annual Indianapolis RedBull MotoGP round in August of 2010.  With the team's direct affiliation with the factory Repsol Honda squad (that operates as a satellite team), the team's garages are side-by-side at the Indianapolis Motor Speedway during the down-time on track.  However, there is no down-time in the paddock area as team techs work about the garages in preparation for the weekend's events.


Marco 'Super Sic' Simoncelli finally accomplished this last weekend what everyone thought he would do all along, it just took a few more rounds to keep his footing underneath him in order to do so.  Simoncelli got his first MotoGP podium over the weekend at the Czech Republic Grand Prix, following winner Casey Stoner and Andrea Dovizioso home to take the 3rd spot on the box in Brno.

Having expected to get his first podium almost all year long in his 2nd full year in the premier road racing series in the world, Super Sic has been in contention in no fewer then 6 of the already run 11 events on the series calendar.  But mistakes and overly aggressive riding have cost him to crash out in four of those events (and having to serve a pass-through penalty in another) prematurely ending his quest to stand on the box with the other greats of the MotoGP World Championship.

Here are a few stories and gallery links from this weekend's Brno round 11 of the 2011 MotoGP World Championship Series.

Team San Carlo Honda Gresini has this press release on Super Sic's virgin podium appearance at the Brno MotoGP round on August 14:

BikeSportNews.com has this article about Marco's appearance on the podium at the Brno MotoGP round:

Autosport.com also has another article about Boris Said's brothers first MotoGP podium at Brno over the weekend:

GPUpdate.net has this piece on Marco's 3rd place finish at Brno from Sunday:

And last but not least, GPUpdate.net has this gallery of pics from round 11 of the 2011 MotoGP World Championship at the Czech Republic Grand Prix:

Cycle News.com's Digital Edition has this report of the Czech Republic MotoGP round, filed by Michael Scott: