Brad Baker on the #12 Lloyd Brothers Motorsports/TeamHurtbyAccident.com/Foremost Insurance/ENI USA-sponsored Ducati leads the pack into turn one during heat 1 race action at the I-96 Speedway, in Lake Odessa, MI. on June 23, as part of the running for round 11 of the 2011 AMA Pro Flat Track Harley-Davidson Insurance Grand National Championship Series.  Baker, who is having a stellar rookie year in his first full season in the Expert ranks, finished the night in the 9th spot, and currently sits 5th in the overall point standings.

Following closely behind (and in no particular order) are Sammy Halbert on his #7 Kings Kustoms/White's H-D/LZ Racing/KK Supply-sponsored XR-750.  Halbert finished the night in 2nd in his heat, and 4th in the main, and still holds the lead in the overall point standings.  Kenny Coolbeth, Jr. on the #2 Harley-Davidson Motor Co/Screamin' Eagle/Spectro Oils/Fox-backed factory XR splits the middle, and followed Baker and Halbert home in 4th in the heat, and finished the night out in the 8th spot in the main.  The King of Cool still sits in the 4th spot of the overall championship standings.

Baker's brother, Scott, on the #11 Lombard's H-D/R&D Machine/Baker Boys/EBC-sponsored XR hangs to the outside.  The eldest of the Baker Boys out of Washington State would finish 15th in the heat, and failed to qualify at Lake Odessa for the main.  Just outside and behind Scott is Cory Texter, on the #65 Harley-Davidson/Screamin' Eagle/Herrs/Invisible Glass-backed XR, who would go on to finish 12th in this heat, and also failed to make the main.

Henry Wiles on the #17 Greg Crow/Gardner Racing/Salinas H-D/DPC Racing-sponsored XR is just out of sight behind Halbert on the inside line on his return to the track after his April surgery on his knee/leg.  Hammerin' Hank would come home 3rd in this heat, and finished the night out in the 12th spot in the main.  Even after missing several rounds due to his recovery period, Wiles still holds the 10th spot in the overall point standings.  Behind Wiles is Australian Flat Track Champion Luke Gough on the #62 Digger/Dick Ford/KK Cycle/Eaken Racing-sponsored XR.  Unfortunately, Gough also missed the main after finishing 11th in the heat and failing to qualify out of his semi race.

DAYTONA BEACH, FL (August 18, 2011) - This year's incredible Sacramento Mile action -- Round 12 on the AMA Pro Harley-Davidson Insurance Flat Track Championship calendar -- was witnessed by a sold-out crowd of close to 12,000 lucky fans. For those who weren't among them, however, MAVTV offers a second chance -- and then some. 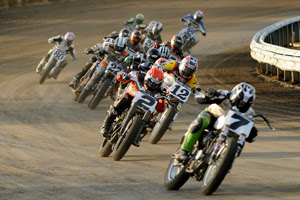 Here's the link to Mav TV's coverage map.  You can check from here to see if your local cable/satellite provider offers MavTV in your area: