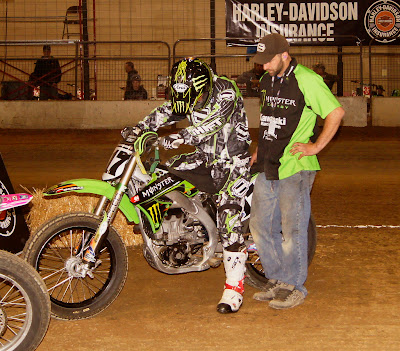 Henry Wiles looks down at his machine-and probably also checking his knee and leg-at the DuQuoin Indoor Short Track on April 16, while waiting for rider intros for the National main event in the Southern Illinois Center at the DuQuoin State Fairgrounds.  Round 3 of the 2011 AMA Pro Flat Track Harley-Davidson Insurance Grand National Championship Series saw the defending 2-Time AMA Pro Flat Track Singles Series Champion suffer leg & knee injuries during his heat race, that by the end of the month, had forced him under the knife with reknowned California surgeon Dr. Ting, and into a rest and rehab program that would stretch to almost three months long.

At the dawn of the return to the Peoria TT round of the series schedule, there are many that probably wonder whether Hammerin Hank will be able to return to form on his #17 Monster Energy/Don's Kawasaki/Shift Racing/Jones Bros.-sponsored KX450F and win his 7th event in a row in Peoria, IL.  Wiles first Grand National win, and first at Peoria, came in August 2004 (the 2007 event was rained out) and the man has been all but unstoppable since, not only in Peoria, but in just about any other event hosted by the IMDA folks in the State of Illinois.  But as has been mentioned several times in the last week by myself, and Tyler Porter over at Fight For Dirt Track.com, this IS the same man who came back from having broken both wrists several years ago to again, dominate at the Peoria TT.

Thanks to the folks at Monster Energy for this great interview with 6-time Peoria TT winner Henry Wiles, as he talks about rehab after his surgery in April, and his return to the 2011 AMA Pro Flat Track Harley-Davidson Insurance Grand National Championship Series:

And don't forget, you can follow all the on-track action here via AMA Pro Flat Track's Live Timing and Scoring.  The riders hit the track at 1030 CT Sunday morning:

Here is the link to the event info at round 14 of the 2011 AMA Pro Flat Track Harley-Davidson Insurance Grand National Championship Series at the Peoria TT:

And you can also follow the action from Peoria via Miriam Deitcher's Flat Track Live @ Facebook, as she posts photos, videos and results from the day's events at the Peoria TT: