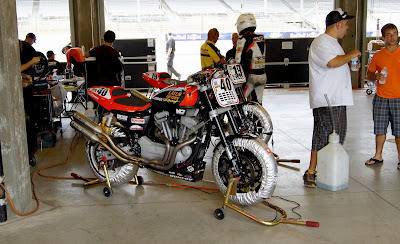 Jason DiSalvo can be seen talking with some members of his crew, while team mate Chase McFarland pulls on the gloves and gets ready to hit the track during the AMA Pro Road Racing Vance & Hines XR1200 Series presented by Harley-Davidson Insurance two-day test at the Indianapolis Motor Speedway.  DiSalvo's #40 Latus Motors Racing/RSRaceCraft.com/FMF/Speedymoto-sponsored machine sits at the ready for the Friday, August 19 afternoon test, while McFarland's #19 Latus Motors Racing sits just behind.

After turning the fastest laps of the two-day test during the afternoon session, DiSalvo made himself a very likely contender to win the doubleheader round at this weekend's RedBull Indianapolis MotoGP events, which have picked up some extra purse money for both races as well as some name riders from the world of motorcycle racing.  But he'll have that much more added competition with the weekend's entry list growing. 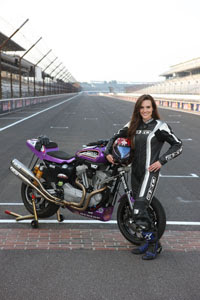 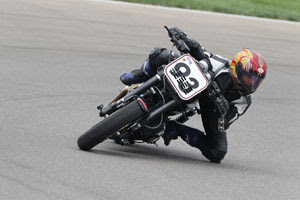 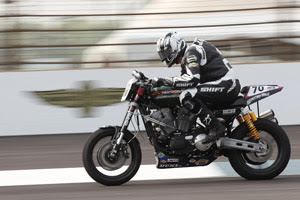 
The riders who take victories this weekend will be following in the distant footsteps of A.G. Chapple and E.G. Baker, who earned the August 1909 five-mile and ten-mile race wins at IMS, respectively. Among the thirty-plus riders who've signed up to vie for that honor are current championship points-leader Chris Fillmore, Daytona SportBike star Jason DiSalvo, two-time XR1200 race winner Steve Rapp, 2010 British XR1200 Trophy Champion Jeremy McWilliams, and 2011 Canadian Harley-Davidson XR1200 Cup Champion Steve Crevier. Joining them will be a litany of other quick riders including Shelina Moreda -- the first female motorcycle racer to compete at Indianapolis -- and popular Indiana locals Michael Morgan and Gene Burcham.
For Red Bull Indianapolis GP tickets and information, visit www.indianapolismotorspeedway.com. To learn more and to be a part of the AMA Pro Road Racing Championship, visit www.amaproracing.com and join us on facebook.com/AMAProRoadRacing and twitter.com/AMAProSBK.