AMA Road Racing: Several Spins on How to Save the U.S. Series 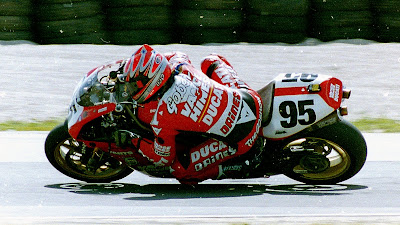 Anthony Gobert wrestles the #95 Vance & Hines/Parts Unlimited/Dunlop/SBS-sponsored Ducati out of turn eight during a qualifying session for the AMA Superbike Championship Series at Road America in June 1998.  One of the best riders to ever throw a leg over a fire breathing AMA Superbike machine in the late '90s and early '00s, Gobert won several races while teaming with the powerhouse V&H team, including this weekend's event at Elkhart Lake, WI. on the four mile course, as part of the Coca-Cola Super Cycle Classic's annual run at the track located some 55 miles north of Milwaukee.

'The Go Show' was an immensely talented rider who under just about any conditions could go out and win a race event, whether it be an AMA Superbike race or a World Superbike (WSBK) event.  Unfortunately, his partying ways got in the way of his talent and he was soon forgotten by the teams that paid the big $$ back in the day, due to his 'unreliability' off the track.  While with the Vance & Hines team, he was teamed with former '91 AMA Superbike Champion Thomas Stevens, and in the '99 season with '98 AMA Superbike Champion, Ben Bostrom.

The days of the fire breathing dragons in AMA Superbike Championship Series racing are long gone, thanks mainly to the falling out of the world economies, which also has seen motorcycle sales drastic fall due to the lack of spending by the general population on recreational items.  Although motorcycle sales in actuality fall more into the mode of 'general and economy transportation,' the sales and numbers in the business are dictated more by the recreational tags due to their 'non-essential' use in terms of their use by the general public.  And just like the RV and boating industries that have also been devastated by the economic fall out, motorcycle sales are dictated strictly by what people can and can't afford in tough economic times.

With the world fallout due to the economic crunch, motorcycle road racing series the world over have reverted back to more 'basic' means in terms of development.  Long gone are the one-offs of titanium parts, ultra high-dollar internal engine modifications, as well as specialty qualifying and racing tires, among other things.  Manufacturers and race teams alike are now reverting to 'Superbike lite' machines, which could be compared to the AMA's old Superstock class-slight internal mods, stock front suspensions with internal additions, and stock swingarms.  The tire manufacturers now only offer three or four choices, as opposed to several years ago when teams and riders had several options in qualifying AND in race trim offerings.

Even with the loss of the 'mega bucks' machines, racing has never been better, especially in the U.S. based AMA Road Racing Series.  Instead of just one or two riders going at it--and splitting from the main pack--as many as 6-8 riders and machines battle at the front in some of the best racing that the U.S. series has seen in years, and maybe decades.

Here are several different views on what it may take to save AMA Superbike racing, and AMA Road Racing as a whole, as well as each reporter's own perspective on the past, current and future state of the American road racing scene in general.  All have their merits, and all have seen the old days compared to today's times in AMA Road Racing.


Evan William at SpeedTV.com has this take on racing here in the States in AMA Road Racing, and talks about 'getting back to the roots' of AMA Superbike Championship Series racing:

Paul Carruthers from Cycle News.com's Digital Edition spins the numbers in comparison to the 'noise' (or lack thereof) in AMA Superbike racing, as compared to the outright blasting that the MotoGP bikes are capable of:

And last but definitely not least, my buddy Larry Lawrence has a very good comprehensive plan to 'fix' AMA Road Racing as a whole.  Having been involved as a reporter and an AMA promotional person in the heyday of AMA Superbike Championship Series racing, you HAVE to take a strong look at what LL is saying from his many years of involvement in the sport.  Read what The Man has to say here, over at his great site, The Rider Files.com: