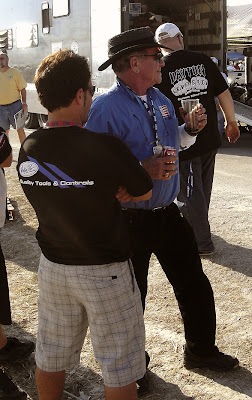 There is no way in the world I could ever come up with any more words that haven't already been written to talk about one of the true legends of AMA Grand National Championship Series racing.

Having found AMA Flat Track racing in the '74 season, former 2-Time AMA Grand National Champion ('67-'68) Gary Nixon was at that time all but retired from full-time flat track racing.  He would contest several AMA Road Racing events in those days, as part of the overall AMA Grand National Championship Series, and would soon after contest the F750 World Championship Series for Kawasaki.

So never having seen The Legend race, nor ever having had the pleasure of meeting him personally, I am in no way qualified to talk about him on this day that we learn of his passing.  And even if I was, there is no way in the world I could ever talk about the man in any better way then what has already been said, or seen about him over the years and decades.

So, in tribute, I present this simple shot that I took of former National #9 at the Lucas Oil Indy Mile back in August of 2010, where he can be seen talking with Shaun Russell, National #28, in the Indy pit area.  Two things I CAN say about the man based alone on this shot, that most will and/or should agree with.....he's got that great smile on his face, and he's probably not drinking JUST a Coke here.

A man who lived a life of a legend on the track, and enjoyed life to it's fullest off of it, will be missed by many as he slides off into the sunset and cranks it into his last full throttle lock........