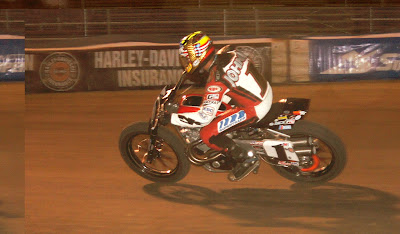 Jake Johnson on his #1 Zanotti Racing/Schaeffer's H-D/Boughner Racing/Arai-sponsored H-D XR-750 supplied some of the main event fireworks at round 11 of the 2011 AMA Pro Flat Track Harley-Davidson Insurance Grand National Championship Series, at the Lake Odessa/I-96 Half-Mile event with his glowing rear disc.  Jake told Cycle News.com's Larry Lawrence after the main that the red-hot disc (which I commented you could have fried bacon on) didn't have any affect on his machine's handling ability, as he came home a solid 3rd place, just 1.826 seconds behing winner Jared Mees, and .165 seconds behind runner-up Bryan Smith.

With less then six laps to go in the 25-lap National, Jake was right on Smith's heels when he hit a rut on the track coming out of turn 4, that all but sent him out of the saddle.  He collected magnificently, and settled into his solid 3rd place finish, and was all smiles on the podium after what had been a rough stretch of races outside of the top 3 since winning the Springfield TT and getting 3rd at the mile in Springfield.

Even with the strong runs-of late from Mees and Smith, this man historically doesn't really get rolling in the series until the second half of the season.  Jake Johnson's time has come, so you don't want to miss what he can, and most probably will, bring to the track.

Brad Baker on the #12 Lloyd Brothers Motorsports/TeamHurtbyAccident.com/Foremost Insurance/ENI USA-sponsored Ducati, leads Sammy Halbert #7 on his Kings Kustoms/White's H-D/LZ Racing/KK Supply-sponsored XR-750, with returning-to-the-track Henry Wiles on his #17 Greg Crow Racing/Gardner Racing/Salina H-D/DPC Racing-sponsored XR-750 during heat one action at round 11 in Lake Odessa.  They finished as shown in their 8-lap heat, and along with 3-Time AMA Grand National Twins Champion, Kenny Coolbeth, Jr., had punched their ticket for the main event.

No matter what he tried, Slammin' Sammy could not get around Rookie of the Year candidate Baker on the LBM Ducati.  Baker put on a great show at the I-96 half-mile, and helped to prove that you CAN get the Big Duc to hook-up on a track smaller then a mile oval.  The Bullet faced a barrage of XRs in the main that, after a great start, ended up relagating him to 9th in the final.  He's hanging tough and is showing that his 5th place in the overall championship standings (131 points) is definitely no fluke.  And this fine young man has the patience and ability to get it all figured out, and when he does, look out!

Sammy ran a great race in the main, bringing his #7 machine home in the 4th spot, 4.423 seconds behind winner Jared Mees.  He also held onto the overall point lead (for now) over Mees, 206-203 points, with Johnson now in 3rd with 197 markers.  The point battle has tightened up, and the fire is hot and burning! 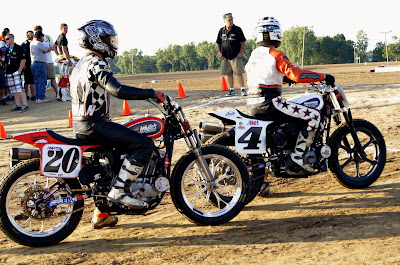 Heat race 3 contestants Matt Weidman #20 on his White's Harley-Davidson/SNIP/Shoei/Silkolene-sponsored H-D XR-750 and Chris Carr on his #4 American Motorcyclist Assoc/Classic H-D/DFW Honda/Arai-sponsored XR, battled close in their heat race, with Carr getting the advantage after the red flag restart to get 3rd behind winner Johnson and runner-up Mees.  7-Time AMA Grand National Champion Carr fought the good fight in the final, to come home 4.596 back of winner Mees in the 5th spot, and Matt came back from a bad start to garner his best finish of the year in the Twins Series with a very promising 6th place finish, 5.1 seconds behind Mees.

Carr will be returning to one (of MANY) of his multi-winning tracks through out his 26+ year Expert career in AMA Flat Track, where he has stood on top of the box at Sacramento a total of nine times.  He is also one of only three riders in the top 20 (Coolbeth and JR Schnabel) in the series that raced Sacto back in '99 when the series last visited (and of course, he won.)  Just because he was gifted a rocking chair by the folks at I-96 Speedway last Saturday as part of his 2011 Farewell to Flat Track Tour, doesn't necessarily mean he is quite ready to use it, yet.  Look for a strong finish out of the second-winningest rider in AMA Grand National Championship Series racing, come tomorrow night!  Between Carr's ability to handle a GNC bike at close to 140 mph in the draft on the mile, and his tuner, Kenny Tolbert, able to extract the max out of a modern XR, the duo should have a hot set-up in round 12.  The Prince of Peoria currently sits in the 7th spot of the overall championship with 117 points.

I got a chance to talk with Matt for a few brief minutes at Lake Odessa between the action, and he was still pumped about his 2nd place finish at Lima at the end of June.  His year has gone much better in 2011, as his family-owned and run team has been fortunate to not suffer any major mechanical ills in their XR stable this year.  Last year was rough on Matt and Family, as they lost a motor at Lima and again at the Labor Day Weekend Springfield Mile, and also suffered a mechanical with one of Carl Patrick's XRs at Springfield.

Jared Mees #9 on his Rogers Lake Racing/Blue Springs H-D/Lucas Oil/Saddlemen-backed XR runs ahead of Bryan Smith on the #42 Moroney's Fasthog.com/American H-D/Rockyonline.com/Boughner Racing-sponsored XR during one of the early practice sessions at Lake Odessa.  Mees went on to win his 3rd race of the season, with Flyin Bryan running ALMOST this close to The Jammer all night in the 25-lap main, and eventually finishing 1.661 seconds back. 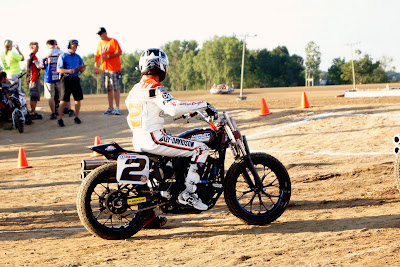 Kenny Coolbeth, Jr. waits on his #2 Harley-Davidson Motor Co/Screamin' Eagle/Spectro Oils/Fox-sponsored H-D Factory XR-750 for the AMA officials to waive him out for the start of heat race one at Lake Odessa on July 23.  The King of Cool fought all night to get to the front, coming in 4th in his heat race to Baker, Sammy and Henry Wiles, and then scored valuable points in the main event with a solid 8th-place finish.  Heading to the Sacto Mile tomorrow, this is one of the guys to keep a VERY close eye on at the return of the series to the Cal Expo Fairgrounds.  You NEVER count out either H-D Factory power OR Kenny Coolbeth on a mile race track. 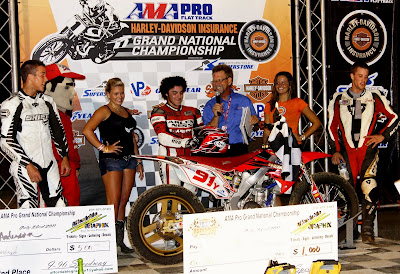 Mikey Martin beams on the podium after taking his #91Y Weirbach Racing/General Engineering-sponsored Honda CRF450R to the win in round 11 of the 2011 AMA Pro Singles Championship at Lake Odessa on July 23.  AMA announcer Barry Boone almost looks as happy as the rest of the folks on the box, which also includes runner-up Conner Anderson (in his first AMA Pro Single podium, white leathers), who rode his #11L Diesel Minnesota/Larsons Cycle-sponsored Honda to a great finish, 4.322 seconds behind winner Martin.  Jake Shoemaker took his #55A Scott Powersports/REV-IT-backed Suzuki RMZ450 to close 3rd place finish, just .348 seconds back of Anderson.

You can read Larry Lawrence's story on the 'glowing ons' at round 11 of the 2011 AMA Pro Flat Track Harley-Davidson Insurance Grand National Championship Series from Lake Odessa, MI., here at Cycle News.com's Digital Edition (thanks LL and CN!):

And thanks go out, as always, to Tyler Porter from Fight For Dirt Track.com for his 'Inslide Line' column this week that talks about last weekend's racing at I-96 Speedway:

And you can read a preview of tomorrow's round 12 event on the 2011 AMA Pro Flat Track Series schedule, the return of the Sacramento Mile, at the Cal Expo Fairgrounds, penned by Dan Jacobson, Sr., and posted at Today's Cycle Coverage.com (thanks guys for a great write-up on the return of this great event to the series calendar!):