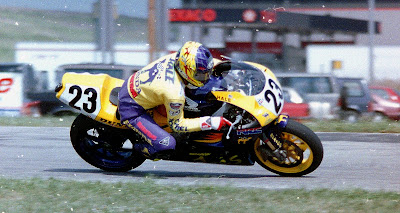 With Martin Cardenas winning his first AMA Superbike Championship Series win at the Barber Motorsports Park round back in June, the M4 Suzuki pilot added his name to a short list of talent over the years to win an AMA Superbike Championship Series race in their rookie season.  The names of Aaron Yates, Ben Spies and Neil Hodgson (among several others) are but a few who actually have won races during their 'rookie' seasons in the premier class of AMA Road Racing since the series was created in the mid '70s.

Chris Martin, who does a super job of keeping the fans up to date on the racing action in AMA Pro Road Racing at SpeedTV.com, penned the following story that compares the men who have tried to win in their first-full seasons in the AMA Superbike Championship Series, and those that have failed along the way.

Have a great and safe Independence Day Holiday today.  Drive (and ride) safe and sober and remember those who made these great United States over the years, decades and centuries the great nation that it is.