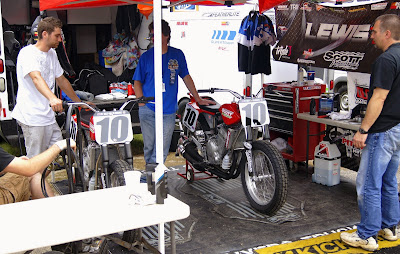 Johnny Lewis and the #10 Scott Powersports/Dubach Racing Developments/Saddlemen/Triple J Racing-sponsored Kawasaki 650R-based team finish up getting their pit area in order after a late start to the day at the Springfield Mile, round 6 of the 2011 AMA Pro Flat Track Harley-Davidson Insurance Grand National Championship Series season in May.  Lewis and the Scott Powersports team have slowly been knocking on the door in getting the 650R-based twin working to their liking and getting solid results along the way as well, in only their second year of development on the bike together.

JL10, a former AMA Supermoto Champion, is making serious headway in the Twins Series events, with just into the half-way point of the 2011 season.  After an 8th place finish at Springfield, a 5th place at Hartford, and a definite out of place 17th at Lima, Lewis and the team pulled it out of the hat at Hagerstown last Saturday to take home his first Twins Series event podium, and the very first podium finish for Kawasaki in a half-mile Grand National Series event.

In what was described by Chew Larcom/FlatTrack.com as 'riding on rails and being the highlight film of the evening,' JL10 hung in throughout the double restarts on the evening to garner a very hard fought second place finish for the evening.  After the second restart, Lewis hung in for the last eight lap dash to come in only .682 seconds behind event winner Kenny Coolbeth, Jr. on the #2 Harley Factory/Screamin Eagle XR-750.  A very worthy feat indeed, considering long-time veterans Jared Mees, Jake Johnson and Jethro Halbert followed him home as he was able to hold off their late-race advances.  Lewis finished his great run as the only non-Harley XR in the top 8 of the main, with the Kawasakis of Jimmy Wood #37 and Shaun Russell #28 finishing 9th and 10th, respectively.

Congrats are in order to Johnny for a super run at Hagerstown, and a great year so far, indeed! 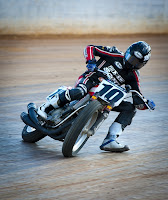 
In front of the enthusiastic Hagerstown Half-Mile crowd, Lewis was in the second heat race during the night program. He led for a few laps on his Penske Racing-suspended Scott Powersports’ Kawasaki before Bryan Smith passed him off turn two. Due to the different power band, Lewis’ bike was spinning harder than the traditional H-D flat trackers; however that would be an advantage later. At the checkers, he crossed in second earning a direct transfer to the main and a spot in the six-rider Dash for Cash.
More adjustments were made to his Scott Powersports’ 650 flat tracker when Lewis got to the line in his black custom AXO leathers for the Dash for Cash. He noticed a solid difference. At the finish, Lewis came across the line in third place.
Prior to the 25-lap main event, one more change was made to the bike. Off the line, Lewis got a great start on his TRX-sponsored Kawasaki and was running second behind the leader Kenny Coolbeth, Jr. He remained in second fending off any challengers during the first 18 laps. Then a crash by another rider red-flagged the main event. On the restart, Lewis spun the tire due to an overheating issue with his bike, moving back to fourth place. He was determined more than ever to take advantage of his riding style and the DR.D-sponsored Kawasaki 650 twin motor by battling for a podium spot. In the final seven laps, Lewis moved past the two riders and at the finish earned a hard-fought and well-deserved second place.
“On the warm-up lap before the main I tested a spot on the track I never rode,” said Lewis. “I realized it could be something to try during the main. Possibly a faster line. With only eight laps after the red flag restart in the main, I had to get by Jake Johnson and Jared Mees quickly to have anything for Coolbeth. So I tried my new line and it worked! It took me four laps to completely get in the clear of Jake and Jared to go back to my normal line. Once I did, Coolbeth had ten bike lengths on me. I had nothing for him. But man, I was super-pumped for the second place finish!”
---------------------------------------------------------------------------------------------------------------------------