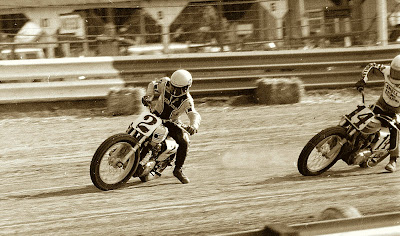 Kenny Roberts on the #2 Yamaha Factory XS-650-based parallel twin leads Hank Scott #14 on the Shell Racing Specialties Yamaha XS-based machine during action in the August '76 AMA Camel Pro Series Grand National Championship main event at the Terre Haute Action Track Half-Mile National.  Roberts would go on to triumph over second-year rider Jay Springsteen on the #25 Harley-Davidson Factory XR-750, with Scott coming home in the 3rd spot.  However, at the end of the year, and for the second year in a row, Roberts would not be able to add to his '73-'74 AMA Grand National Championships, and Springer would go on to earn his first of three championships after the season-ending event at Ascot Park.

The King would go on to campaign the '77 AMA Camel Pro Series Grand National Championship Series, before turning his, and the world's attention to his quest to campaign the 500CC World Championship in Europe.  Roberts showed up on the European scene early in the '78 season to find that just about everyone figured he didn't have a chance against the likes of 2-Time World Champion Barry Sheene and the rest of the paddock in 500CC racing.  Just about everyone but The King, who would go on to earn his first of three consective 500CC World Championships and cement his status as one of THE all-time greats in world-level road racing.

The man who would be 'King,' Kenneth Lee Roberts from Modesto, CA., will be honored at the year-end Motorcycle Hall of Fame Ceremonies in Las Vegas as part of the AMA Legends and Champions Weekend at the Red Rock Casino.  Roberts, who was inducted into the AMA Motorcycle Hall of Fame in 1998, won two AMA Grand National Championships in '73-'74, and then after the '77 season headed off to Europe to contest the 500CC World Championships, winning his first of three in a row titles in his 'rookie' season in 1978.

You can read the official announcement from the Motorcycle Hall of Fame below, as we all take time to bow to The King!