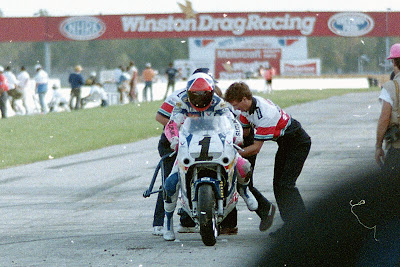 Multi-time WERA Champion Kurt Hall on the #1 Team Emgo/Valvoline Suzuki GSXR gets a push off after a pit stop during a WERA Endurance Series race at Indianapolis Raceway Park (now Lucas Oil Raceway at Indianapolis) in 1990.  Helping to assist on the stop is Team Hammer's crew chief, Keith Perry (in glasses) who to this day still crews for the original Team Hammer (now M4 Suzuki) in the AMA Pro Road Racing Series.  Team Hammer started back in the very late '70s/early '80s with Bruce Hammer and John Ulrich (of RoadRacingWorld.com fame, among others!), and is one of very few teams over the years/decades who never strayed from running the Suzuki marque in racing, which they have now campaigned for over three decades.

Kurt Hall was one of the most popular and winningest riders in WERA competition from the early-mid '80s until he hung up his helmet and leathers over 17 years ago.  Campaigning Honda, Yamaha and Suzuki machines over the years, some of his biggest wins came in the WERA Endurance Series while riding for the Human Race Team and Team Hammer (now M4 Suzuki.)  Hall was as personable off the track as he was effective on the track when racing, and always seemed to have a smile on his face around the paddock.

Larry Lawrence's The Rider Files.com has a great overview of his career over the years that takes a look at one of the most popular and lethal men to have ever thrown a leg over a road racing machine over the years.  Great reading about one of the greats of the sport!

Thanks to LL for another great story on one of the legends of the sport, and one of the truly nice guys around the paddock: