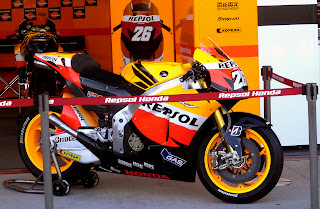 Dani Pedrosa's #26 Repsol Honda RC212Vs sit outside and inside the team's garage area at the Indianapolis Motor Speedway during the Red Bull Indianapolis MotoGP round in August of 2010.  Pedrosa went on to win the 3rd Annual stop at the Brickyard by over 3 seconds to runner-up (and 2010 MotoGP Rookie of the Year) Ben Spies on the Tech 3 Monster Energy Yamaha YZF-M1.

Just 11 weeks after getting taken out in a racing crash with Marco Simoncelli and shattering his collarbone (again), Pedrosa returned to winning form at the Sachsenring round of the 2011 MotoGP World Championship today by setting the fastest lap of the event on lap 20 of the 30 lap race, and taking the win over 2010 MotoGP World Champion Jorge Lorenzo on the Yamaha Factory Racing YZF-M1.  Repsol team mates Casey Stoner (3rd) and Andrea Dovizioso (4th) made it a great race up front, and Ben Spies broke up the Honda party to finish 5th, with San Carlo Honda Gresini rider (and Non-crasher, today) Marco Simoncelli finishing in 6th.

In taking his 2nd win of the season, Pedrosa showed the world that he is fully healed for race competition (at least until something else breaks on the dimunitive Spainard) and ran a strong race to win by 1.477 seconds over Lorenzo.  After not scoring any points for four events, Pedrosa now lies 5th in the championship hunt with 94 points.  Stoner still leads Lorenzo in the title hunt 168-153, with Dovi 3rd with 132 markers.  After a great run today by 7-Time MotoGP World Champion Valentino Rossi on the Marlboro Ducati from 16th to 9th, The Doctor lies 4th in the championship with 98 points.

The real story of the weekend from the half-way point in the 2011 MotoGP World Championship season was the tire problems (still) encountered by many of the riders over the course of the weekend.  With warm-up times being slower and what seemed to be overly lengthy due to the number of crashes, Bridgestone (the MotoGP spec-tire provider) was scrambling to pull their heads out of the ground in order to try and rectify the situation.  With some rules mods from the MotoGP commission, this hopefully will be the help that the Japanese tire manufacturer will need to keep the riders happy-and crash free-in the premier motorcycle road racing series in the world.

Thanks to David Emmett from MotoMatters.com for the following stories and press releases from today's eni Motorrad Grand Prix Deutschland MotoGP race at the Sachsenring Circuit in Germany:

Here's David's spin on the racing for the day at Sachsenring:


And Larry Lawrence's The Rider Files.com has this story of the race filed by Tracy Hagen:

Results can be found here thanks to MotoGP.com (adjustable for event info needed):

Photos from the Sachsenring round of the 2011 MotoGP World Championship

Thanks to SpeedTV.com for this great album of shots from today's MotoGP round in Germany:

And GPUpdate.net has this great selection of event photos from round 9 of the 2011 MotoGP World Championship: