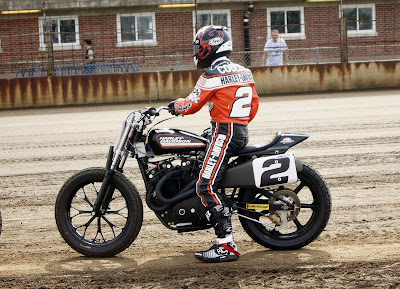 Kenny Coolbeth, Jr. on the #2 Harley-Davidson Motor Co/Screamin Eagle/Spectro Oils/Fox-sponsored XR-750 gets ready to roll out for practice in May for round 6 of the 2011 AMA Pro Flat Track Harley-Davidson Insurance Grand National Championship Series at the Springfield Mile.  The King of Cool had a 2-4-4 day at the Illinois State Fairgrounds oval (2nd in his heat, 4th in the Dash for Cash, and 4th in the Expert Twins main) and has been progressively been working his way up the charts since that first Twins Series event just over six weeks ago.

With a 2nd place finish at Hartford and a 6th place finish at Lima, Kenny found the top of the box last Saturday night for his 3rd win at the Hub City Classic in Hagerstown, MD. on the half-mile, wide groove track.  Leading all laps of the 25-lap final, to go along with his fastest heat win on the night and the win in the Dash for Cash, Coolbeth now sits a very solid 4th place in the overall championship standings just 26 points behind current points leader Sammy Halbert (191-165).  Coolbeth also won his 2nd GNC event of the year after having won the DuQuoin Indoor Short Track on April 16 on his Singles Series Chaplin Kawasaki.

According to Chew Larcom from FlatTrack.com, Coolbeth was on cruise control all night, even after the event was delayed due to red flags for downed rider Doug Lawrence #73 on the 17th lap, and also after Chris Carr #4 went down on the re-start.  Coolbeth kept his Factory Harley-Davidson XR-750 out front after getting around early leader Johnny Lewis on his #10 Scott Powersports Kawasaki, who earned his best-ever finish in a Grand National Championship Series event by coming home 2nd on the evening.  Jared Mees #9 on his Rogers Lake Racing XR rounded out the podium, with defending 2010 AMA Pro Flat Track Grand National Champion Jake Johnson on his #1 Zanotti Racing XR in 4th, and Jethro Halbert on the #69 Goodwin Racing XR in 5th.  It was also Jethro's best finish of the year, running a borrowed machine after his regular Memphis Shades/Babe DeMay XR was with the team's transporter, which broke down en route to Maryland.

Johnny Lewis on his #10 Scott Powersports Kawasaki was also said to be in great control all night, providing fans of the event with a 'typical highlight film' of riding to stay up at the front in his best-ever finish in his promising young career.  His machine reportedly started spewing water during the long break before the re-start, which seemed to cause some confusion before the green flag was re-thrown.  Apparently some of the other liquid-cooled machines experienced the same problem during the delay, but all were able to re-start without any major machine or track issues noted.

Jared Mees on his #9 Rogers Lake/Blue Springs H-D did his usual yeoman's job of late of fighting to get to the front, but was held off by Lewis and had to settle for 3rd place.  Mees also finished 2nd in the Dash, while Lewis brought it home in 3rd in the extra-points paying event.  Mees now sits in 3rd place in the overall point standings with 175 points, just one point behind current 2nd place man Johnson.  Brad Baker #12 on the Lloyd Brothers Motorsports Ducati had a rough evening and wasn't able to qualify out of his semi, but still sits in the 5th spot in the overall standings with 119 points.  As a result of his 2nd place finish, Lewis moved up to 6th in the overall standings with 116 points, with 7-Time AMA Grand National Champion Chris Carr falling to 7th in the standings (103 points) after a rough night at Hagerstown, and finishing in the 17th spot in the 18-rider main.

Of note, current points leader Sammy Halbert on his #7 Kings Kustoms XR had a rough evening, and as a result of what was termed a 'poor tire choice' in not being able to gain traction, had to settle for 14th in the main event, his first showing on the year outside the top 6.  However, the season is still young, and with only 10 of a 'scheduled 22 events' run, don't expect to see that happen again with Slammin Sammy!

Coolbeth Takes Career Third Victory at Round 10's
Hagerstown Half-Mile
HAGERSTOWN, MD (July 9, 2011) - With a near-capacity crowd looking on, Harley-Davidson Motor Company-backed Kenny Coolbeth captured his third Hub City Classic Grand National win in convincing style, leading every lap of the 25-lap AMA Pro Racing Harley-Davidson Insurance Flat Track Championship main event. "I love racing here," said Coolbeth after the event, "it's like my hometown track. A lot of my friends and family make the trip down for this race." 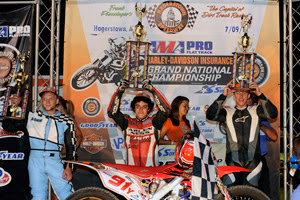 
Weirbach Racing's Mikey Martin won his first main of 2011 in the sixteen-lap Hagerstown Motorcycle-Superstore.com Pro Singles contest. Pro Singles Dash winner Adam Bushman (Midwest CNC) had grabbed the holeshot, but he couldn't hold off a hard-charging Martin and Gerit Callies. The Full Throttle-backed Callies was on another Weirbach Racing Honda, giving Dick Weirbach a sweep of the top of the podium, and Bushman took his solid third over fast-qualifier Robbie Treinen (Bob Weirbach Race Team/Trackside Bar) and Scott Powersports' Jake Shoemaker.
Callies has retaken the overall Motorcycle-Superstore.com Pro Singles points lead, but heads Mikey Avila (SDI Insulation/M.E.H. Corp), who finished off the pace in eleventh, by a very slim two points.
The AMA Pro Harley-Davidson Insurance Flat Track Championship next heads to Lake Odessa, Michigan, for the Round 11 I-96 Half-Mile. For tickets and information, visit www.i96speedway.com or call (616) 642-0555. To be a part of the AMA Pro Harley-Davidson Insurance Flat Track Championship, visit us at amaproracing.com and join us on facebook.com/AMAProFlatTrackSeries and twitter.com/AMAProFlatTrack.

Here's the story of the race at round 10's event at the Hagerstown Half-Mile thanks to Dave Hoenig and Cycle News.com from this week's issue of CN Digital:

And here is the basic story of the race thanks to Cycle News.com:

Here is the link to the results from Hagerstown (with drop down button for complete results info) thanks to AMA Pro Flat Track (standard version):

And here is the link to the complete event results from round 10 of the AMA Pro Flat Track Harley-Davidson Insurance Grand National Championship Series, from the Hub City Classic in Hagerstown, MD. (PDF version):

Here's the link to Dave's official website, Flat Trak Fotos.com.  As of this writing, the complete results are posted, and Dave should have his full catalog of shots from the Hub City Classic posted within a few days:

Thanks to Miriam Deitcher from Flat Track Live @ Facebook for these videos from the Hub City Classic at the Hagerstown Half-Mile!

A big thanks to Mia Moore & Chew Larcom, The Fans in the Stands from FlatTrack.com, for this SUPER video recap of the day's events at Hagerstown.  Great stuff guys!