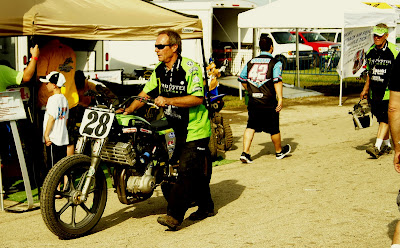 Jay Springsteen rolls Shaun Russell's #28 Monster Energy/Werner Springsteen Racing/Wossner Pistons/MotionPro-sponsored Kawasaki 650R-based machine through the pit area on the way to the 'waiting area' just off the track before the heat races at the Springfield Mile on May 29.  Following close behind the 3-Time AMA Grand National Champion is team head Bill Werner, himself a 13-Time AMA Grand National Championship winning tuner, bringing the starter for the team's machine to crank it up.

Neither of the team's riders qualifed for the main event at round 6 over the Memorial Day Weekend, with both JR Schnabel #33 and new-signee (just before the race weekend) Shaun Russell #28 failing to qualify for the National out of their heat race. (In all fairness to everyone, heats-only qualified for the main during the spring event, as the semis were scrapped due to the abbreviated program after taking several hours out of the day getting the track ready after the previous day's rain deluge.  The extra time on the bikes in another 8 lap session alone could have made for more time to sort things out!)

The WSMEK team has struggled more then would be expected this year after the breakout year they had in the 2010 season.  With National #42, Bryan Smith twisting the throttle last year, the team scored three podiums and two wins, and finished the season ranked in the 7th spot in the Twins Series and 8th overall.  With the numbers they put up over the season, the team helped Kawasaki win the Manufacturer of the Year Award from AMA Flat Track, and during the off-season signed new rider Schnabel, a long-time veteran of the series, to run as a team mate to Smith, to further help on development of the machine.

Unfortunately, after the season openers in Daytona, Flyin Bryan announced he was going it alone with his Moroney's Fasthog.com XR team, and Schnabel was left to help develop a new (to him) ride alone.  Then, just before Springfield, the team signed another long-time veteran of the Series, Russell, as a team mate to JR.  At this point of the season, the only results the team has to show in the Twins Series is Russell's 10th place at Hagerstown last weekend, and JR's 13th at Lima at the end of June, after four Twins rounds down on the year.  Definitely not what anyone would have expected after setting the bar in the 2010 edition of the series.

All can't be doom and gloom for the team and it's fans, however, if for no other reason the vast experience pool that each member brings to the team as a whole.  Just Bill and Jay alone have more experience in their lives in flat track then a handful of others, and Schnabel and Shaun combined have over a quarter of a century of experience (as Experts, let alone coming up through the ranks ) to bring to the track.  And getting used to what for both of the riders is a new machine, in terms of handling and power characteristics, is a very big step.  Especially in the world of AMA Flat Track Series racing where the tried-and-true H-D XR-750 has been at the forefront for going on it's 5th decade now, except for a few great years when Honda came in and knocked everyone's door down, only to leave and close it behind them. 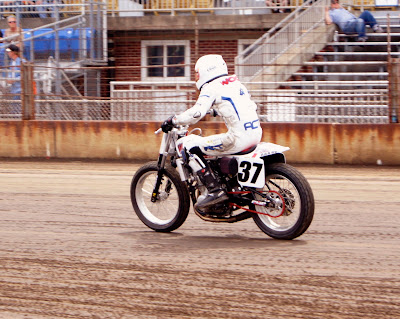 Jimmy Wood on his #37 Southland Racing/M.E.H. Corp/Racetech/Hostility Clothing-sponsored Kawasaki 650R-based machine heads out for practice during more round 6 action from the Illinois State Fairgrounds mile oval.  Wood debuted his new mount at the first Twins Series round, and also suffered from the lack of track time due to not being able to qualify from his heat into the main at Springfield.

Since then, however, he has managed to turn some heads with setting some fast qualifying times, two-9th place main event finishes and an 11th at Hartford, with a 3rd in the Dash at Hartford thrown in.  As a result, he sits 11th in the Twins Series point standings, and coupled with his great Singles Series program, the west coast flat tracker is 9th in the overall standings. 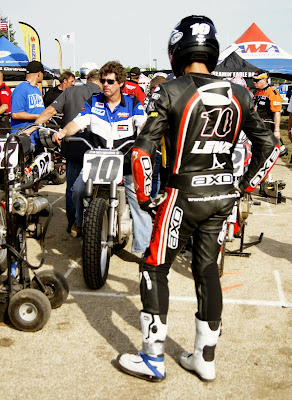 Johnny Lewis stands ready to mount up, looking over his #10 Scott Powersports/Dubach Racing Developments/Saddlemen/Triple J Racing-sponsored Kawasaki 650R-based mount while team head Mike Scott sits ready to fire up JL10's machine before the heat races at Springfield at the end of May.  Lewis, in only his second full year of competition in the AMA Pro Flat Track Harley-Davidson Insurance Grand National Championship Series, bagged his first Twins Series podium of his and the team's young, but very promising career and future in AMA Flat Track Series racing last Saturday night at Hagerstown.

Lewis and the Scott Powersports Kawasaki team have been making some big noise this year, after having a good start to their pairing during the 2010 season.  Lima was a little rough on them, as they only managed a 17th in the main (due to a reported bad gearing choice), but Johnny has two-top 3 Dash finishes and a 5th place finish at Hartford to go along with his 8th place at Springfield.  This team is just starting to gel, as well as getting used to the nuances of the machine.  Last Saturday's 2nd place at the Hub City Classic at the Hagerstown Half-Mile was also the first for a Kawasaki on the podium in a half-mile event.  And Kawasaki is starting to take notice of this former AMA Supermoto Champ and the work he has been doing at the AMA Flat Track events on his SPK machine, as noted by the official press release from Team Kawasaki Racing below.

Team Kawasaki posted this great release this week showcasing the work that Johnny Lewis and the Scott Powersports Kawasaki team has been doing in the 2011 edition of the AMA Pro Flat Track Harley-Davidson Insurance Grand National Championship Series season.  Noting the effort put forth by Johnny and the team to garner themselves their first Twins Series podium at Hagerstown last weekend, they also take time to note the work put in by Bill Werner and Jay Springsteen in taking the Monster Energy Werner Springsteen Racing Kawasaki to two back-to-back mile wins last year with Bryan Smith #42 in the seat.


Great reading and super to see Kawasaki get fired up about the AMA Pro Flat Track Series!  Read on:

Tyler Porter over at Fight For Dirt Track.com has a nice little interview with Johnny Lewis from after the Hagerstown round win on July 9.  Check it out here:

And in this week's edition of The InSlide Line column from Tyler, he talks about Johnny's first Twins podium last weekend in Maryland, and also gets Johnny talking about his race plans this weekend during the off-week.  More excellent reading thanks again to Tyler: