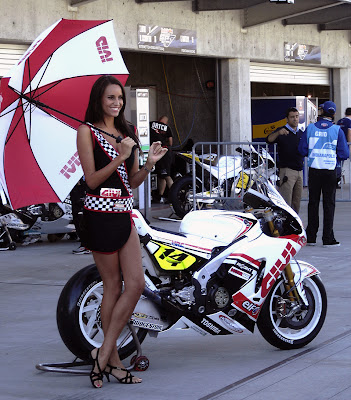 LCR Honda's umbrella girl Lauren Vickers shows off the satellite team's RC212V during the Red Bull Indianapolis MotoGP round at the Indianapolis Motor Speedway in August of 2010.  Ms. Vickers has since moved on (along with '09-'10 rider Randy DePuniet) to the Pramac Ducati team for the 2011 season.

You can check out the rumor mill article here thanks to Dean Adams and Company at Superbikeplanet.com.  As of this posting, no other word has come through on this anywhere on the internet, but I thought it was interesting anyway.  (I would think that BBoz' contract with Michael Jordan Suzuki would keep him off of the bike due to restraints riding another brand, but, you never know!)

It's official, Ben WILL be riding the LCR Honda at Laguna Seca this coming weekend.  Read the press release here thanks to Michael Jordan Motorsports: