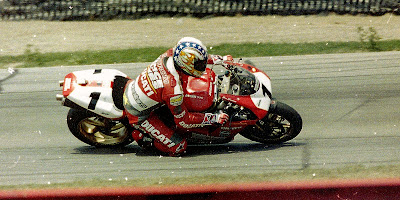 Ben Bostrom on the #1 Vance & Hines/Parts Unlimited/Dunlop/Castrol-sponsored Ducati 996 is shown during one of the qualifying sessions for the Wiseco Superbike race at the Mid Ohio Sports Car Course in July of '99.  BBoz was leading the final event in Lexington, OH. over the course of the Honda Super Cycle Weekend presented by Dunlop Tire, in what surely would have been a runaway win, over his then-team mate Anthony Gobert and Yoshimura Suzuki's Mat Mladin, when what was reported as a shifter shaft seal started spewing oil all over the rear of the machine.  Bostrom pitted and was able to return to the track, but at the time without his first premier class win in the AMA Superbike Championship Series.

After the '99 season, the elder of the Boz Brothers took his great talents to work for the NCR Ducati team in World Superbike competition for the 2000 season. While also riding for various other teams in WSBK competition, Bostrom won several WSBK rounds over the course of the three seasons he campaigned the European tour.

Bostrom signed during the winter break to ride the #23 Michael Jordan Motorsports/Jordan Brand-sponsored GSX-R1000 in the 2011 championship, where for the first time (since what seems like forever) he was forced to drop his familiar #11 or #155.  Bostrom and the Jordan team, along with team mate Roger Hayden, had struggled with the new set-ups on the '11-spec GSXRs until the youngest of the Hayden clan pulled off a third place finish at Mid Ohio earlier in July.  Bostrom currently sits 6th in the 2011 AMA American Superbike Championship Series standings, going into this weekend's race as part of the undercard for the MotoGP Weekend at Laguna Seca.

One of the veteran riders in the series now, Bostrom is also one of the greats of the sport as well as one of the nice guys in the paddock.  With an even temperment on and off the track, he is adored by fans, sponsors and team owners alike.  It was rumored over the weekend MotoGP round at Sachsenring on July 15-17 that LCR Honda, once the premier satellite Honda teams in the MotoGP circus, that Ben was being considered for a wild card ride for this coming weekend's Laguna Seca round.

The news was made official earlier today, and BBoz will join LCR Honda team mate (for the weekend) Toni Elias on the MotoGP grid on the team's RC212V.  This should also push the grid to 18 riders, should no one get hurt or not be able to ride the premier event on Sunday, July 24.  It should also make for four Americans on the grid, along with usual MotoGP regulars Nicky Hayden, Ben Spies and Colin Edwards.

Here's the official press release from LCR Honda on Ben Bostrom getting a wild card ride at the Red Bull U.S. MotoGP round at Laguna Seca this coming weekend on the satellite Honda/HRC team:

And from his U.S. team, Michael Jordan Motorsports has issued their version of the press release on BBoz riding at the MotoGP round at Mazda Raceway in Laguna Seca this weekend:

Thanks to the new issue of Cycle News Digital for this article about Ben riding for the LCR team this coming weekend: