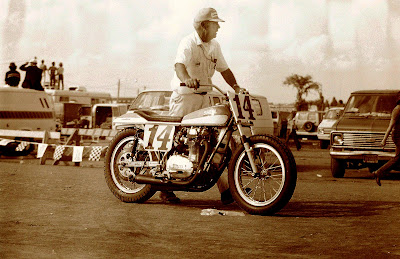 Shell Thuet pushes one of Hank Scott's #14 Shell Racing Specialties Yamaha XS-650-based parallel twins through the pit area at the Syracuse Mile round of the AMA Flat Track/Camel Pro Series in September 1975.  Thuet, who tuned for 2-Time AMA Grand National Champion Kenny Roberts during his '73-'74 championship run, passed away the other day at the ripe young age of 98 late last week.

Thuet was hired by the Yamaha factory in the early '70s to wrench for the future King, and after Yamaha downsized it's race program after the '74 season, he re-opened his California race shop, Shell Racing Specialties, and hired National #14 Hank Scott to ride his famous orange and white Yamaha XS machines in AMA Flat Track Grand National Championship events.  Although the machine never won another GNC title, it did go on to win several more National Championship race events with Hank in the seat.  Other famous riders (among others) to ride for the famous wrench included Eddie Lawson, Wayne Rainey, Ted Boody and Keith Mashburn, who rode Yamahas for the U.S. Yamaha factory that were wrenched by Shell before he was hired to head up Roberts' team.

One of the true innovators of the sport, Shell's career as a tuner in motorcycle racing spanned over 60 years, turning the wrenches on many of the long-gone brands of days gone by, including Indians and Royal Enfields.  He had retired from being active in the AMA Flat Track scene in the mid '80s, but was still active in his later years building motors and complete bikes for many vintage racers.  The world of AMA Flat Track/Class C racing lost a great one last week with his passing.

A great website for Yamaha XS650 fanatics like myself, 650 Motorcycles.com, has this rundown from when Shell Thuet had his XS racing business back in the mid-'70s.  Check it out:

650 Motorcycles.com also has this great synopsis of Shell's nomination to the AMA Hall of Fame:

A gentleman by the name of Mike Konshak has this great tribute to Shell at Slide Rule Museum.com:

Mr. Konshak also wrote this super article about Shell.  It's a 26-page read on one of the all-time greats in AMA Flat Track tuning history (PDF-downloadable link):

And from the AMA Motorcycle Hall of Fame, this biography of Shell Thuet is a must-read:

Dean Adams at SuperBikePlanet.com penned this short article about Shell Thuet back in August of 2007, which includes a recent (at the time) shot of one of the great wrenches of all-time in AMA Flat Track history:

And Larry Lawrence has this great tribute to Shell, which includes a nice sound bite from when LL interviewed Shell back in 2003.  Check out LL's story over at his bitchin The Rider Files.com:

One of the best and most honest journalists out there today, besides Larry Lawrence, Chris Martin, Paul Carruthers and a small handful that I am familiar with that have covered various racing series over the course of the last three+ decades, is Dean Adams from SuperbikePlanet.com.  Even though Dean's site is obviously geared towards road racing, Dean is also an old flat track head, admittedly or not.  And occassionally he will wax on topics familiar to many a flat track heads, like myself.

Here is the link to Shell Thuet's eulogy, as penned by Dean from Minnesota, in what I must say is a very fitting tribute to a man who ruled the sport for decades.  RIP Shell, and thanks Dean!