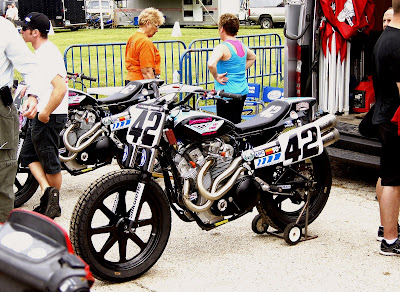 Bryan Smith #42 can be seen on the left side of this shot talking with some of the fans and participants in the pit area while his team and crew get unloaded and set up at the Springfield Mile after a delay in the event's program on May 29.  The Moroney's Fasthog.com/American H-D/Rockyonline.com/Boughner Racing-sponsored Harley-Davidson XR-750-mounted rider rolled out two machines, with new colors and sponsors, at the first Twins Series event of the year on the 2011 AMA Pro Flat Track Harley-Davidson Insurance Grand National Championship Series at the Illinois State Fairgrounds.  After the opening season rounds in Daytona, Flyin' Bryan decided to go his own way from the Werner-Springsteen Kawasaki team (who he rode for in the '10 season and at Daytona) and start his own team up.  Smith and his father, Barry, re-built and put the bikes together out of their shop and showed up on the scene at Springfield looking mighty racy and VERY sweet!


After ending the practice sessions in the 12th spot, Bryan qualifed 8th overall to take the third starting spot in the second heat on the Illinois mile oval, and proceeded to run down early-leaders Sammy Halbert #7 and eventual event-winner Jared Mees #9, to take his first win out of the box with his newly formed team and fresh set-up. Unfortunately, Smith's bike broke in the main and he only came out of the event with a 17th place finish.

To put this into perspective, his great runs have moved him from 19th in the overall point standings to 10th going into Saturday's event at the I-96 Speedway at Lake Odessa, MI.  Even more impressive, especially if you consider the Springfield main bogey, Smith's extremely strong rides have moved him to 4th in the Twins Series points, behind current-leader Jared Mees (86 points), Kenny Coolbeth (78 points), and Sammy Halbert (71 points, who leads the overall point standings.)  I know the series (thankfully) has consolidated, but you have to look at that one to appreciate the work Smith has been doing!

Needless to say, this fine young racer is on a hot streak, probably second only to Mees' or Coolbeth's at the half-way point of the season.  And with his prowess on the half-mile events as shown in the last three races, there's no reason to think that tomorrow's half-mile will be any different for #42.  As the saying goes, '.....if I was a betting man......'

With Sammy Halbert #7 on his Kings Kustoms XR leading the overall points (191) coming into Lake O, defending AMA Grand National Champion Jake Johnson in 2nd (176), '09 Grand National Twins Champ Mees in 3rd (175), 3-Time Twins Champ Coolbeth in 4th (165) and Rookie of the Year candidate (and current runaway for the honor) Brad Baker #12 in 5th (119 points), there is going to be a major dogfight in the midst of Michigan tomorrow.

Other contenders to watch out for on Saturday include (among many others in The Rolling Thunder Show) Johnny Lewis #10 (hot off his great run to 2nd at Hagerstown on his Scott Powersports Kawasaki and currently 6th in the overall standings with 116 points), and 7-Time Grand National Champ Chris Carr on his #4 AMA/DFW XR, looking for his first win this year in his Farewell to Flat Track Tour (and 7th in the overall standings with 103 points.)  Other names to keep an eye on include Matt Weidman #20, Jethro Halbert #69 and Jimmy Wood #37.  And it has been rumored that the Werner Springsteen Kawasaki duo of JR Schnabel #33 and Shaun Russell #28 have made a few changes to help propel them ahead in their so-far lackluster seasons.


DAYTONA BEACH, FL (July 22, 2011) - When Round 11 of the AMA Pro Harley-Davidson Insurance Flat Track Championship visits Lake Odessa, Michigan's I-96 Speedway June 23, it'll do more than thrill crowds with some of the fastest, tightest racing in the world; it'll serve as the grand finale of the Michigan Festival of Speed.


For Coolbeth, the return to I-96 can be nothing but good news: he is the only rider in Grand National history who's managed to earn more than one win at the facility, and Coolbeth, in fact, has claimed three. Chris Carr, however, is still hunting his first victory at I-96, and when the Chris Carr Farewell Tour swings into Michigan, the American Motorcyclist Association/DFW Honda-backed rider will be looking to rectify that oversight, as I-96 comprises one of the few AMA Pro tracks at which Carr hasn't scored a win.
In Motorcycle-Superstore.com Pro Singles competition, meanwhile, the points race is just as tight as in the premier Expert class. Mikey Avilia (SDI Insulation/M.E.H. Corp.) held the championship lead when the field lined up at Hagerstown, but while the four-time winner struggled on the slick, fast half-mile and finished eleventh in the main, Gerit Callies (Full Throttle/Sioux Falls Truck & Trailer) churned out a last-lap pass for second that put him two points ahead of Avilia.
The night belonged to Weirbach Racing's Mikey Martin, however, who won his first Pro Singles main in Hagerstown and closed to within nine points of leader, for third overall. The first ten races in the super-competitive Motorcycle-Superstore.com Pro Singles have featured five different winners thus far, evidence of the incredibly close race-action sure to continue in Michigan.

For tickets to tomorrow's event, call (616) 642-0555 or visit www.i96speedway.com. To be a part of the AMA Pro Harley-Davidson Insurance Flat Track Championship, visit www.amaproracing.com and join us on facebook.com/AMAProFlatTrackSeries and twitter.com/AMAProFlatTrack.

Here are all the links you will need to keep up with round 11 of the 2011 AMA Pro Flat Track Harley-Davidson Insurance Grand National Championship Series, when the riders hit the track at I-96 Speedway in Lake Odessa, MI. at 3:30 P.M. EDT on Saturday, July 23, 2011

(Note--all links can be accessed in seperate windows by right clicking and selecting 'open in new window' on your Internet Explorer browser-not sure how the others work in this way!)

(Also note-I didn't bother to throw in Twitter links in here as they seem to be sporadic, at best in getting event info, although there are a few noted in the AMA press release above.  There are also a couple of others on the left side column of the website, should you find them useful!)

Full event info for round 11 at I-96 Speedway at Lake Odessa, thanks to AMA Pro Flat Track (PDF versions--note:will be live tomorrow afternoon!):

Miriam Deitcher will be on-hand keeping fans up with what is happening on and off the track on her Flat Track Live @ Facebook:

Weather info for Lake Odessa thanks to The Weather Underground:

Where IS I-96 Speedway, you ask?  Right here, thanks to Google Maps: