AMA Flat Track: Jared Mees Checks In After Winning His 3rd Race of the Year at Lake Odessa 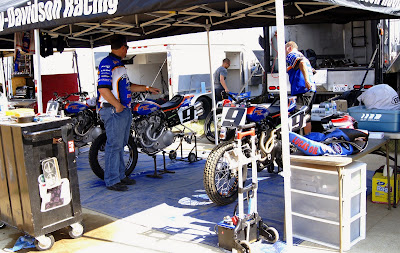 Jared Mees' #9 Rogers Lake Racing/Blue Springs H-D/Lucas Oil/Saddlemen-sponsored mounts sit underneath the team's pop-up awning during round 11 of the 2011 AMA Pro Flat Track Harley-Davidson Insurance Grand National Championship Series at the Lake Odessa, MI. half-mile event.  Team crew chief Brent Armbruster (background, right) and another member of the team work on getting The Jammer's machines ready during the break in the on-track action.  Mees' can be seen walking between the team's pit area towards the transporter in the background.


This is a race I have been itching to win for years now. I have come close several times, finishing 2nd to Kenny Coolbeth one year, and at another time I had a good shot at it but three laps from the finish I had a flat tire. Like Hagerstown, it is just one of those races I have really wanted to win. It’s my adopted hometown crowd and a lot of friends come out to watch this race which gets pretty hyped up around the area.

The first time out on the track for practice I felt awesome but was slow. I tried a different bike for the next round, the first qualifying, and was 5th fastest, and then in the last round, the final qualifying, I was 1st, giving me a combined 3rd fastest. I was on the pole in the 3rd Heat with Jake Johnson who was very close to my time in the final qualifying. So I knew he was going to be THE guy. Sure enough, he grabbed the hole shot and set a very fast pace. I had nothing for him, and then we had a red flag when Steve Murray went down. ON the re-start I got a decent jump. Jake missed a shift going down the back stretch allowing me to get by. A few laps later Jake went sailing by again. I ended up 2nd in the Heat, good enough to get into the Dash for Cash.

For the Dash I changed bikes again to see if this one was better. I got the hole shot and felt good but slipped in one of the corners and Jake got by me again. I got a 2nd, which I was pretty happy with—especially the 4 points that went with it.

For the Main Event I was not ready to give up on it but again figured that Jake was the guy to beat. I thought that if I could just stick right behind him and get a 2nd it would be a pretty good night. He waxed me in the Heat and the Dash, so I knew his speed was better than mine. I got a decent, not great, start and was riding my same line I had been all day, which earlier had not helped. I went into turn 1 down low and passed two riders, and off turn 2 passed Bryan Smith and took off. I just kept hitting my marks and when the 5-to-go flag came out I peeked over my shoulder and saw my gap. I was able to maintain the lead until the finish to make one of my dreams come true by winning the I-96.

It was very exciting to have two of my good buddies, Bryan Smith and Jake Johnson, sharing the podium at I-96, having finished 2nd and 3rd respectively.

We are on our way to Sacramento right now, driving the rig out with Jake, Nichole Cheza and Jimmy Wood. No time to relax and enjoy the win.

Until next time, thank you to my team, sponsors and all the flat track fans out there.

You can check out some of Jared Mees and Blue Springs H-D's videos below via their You Tube.com links.  They don't have a new vid posted yet from Lake Odessa, but should soon.  All of the team's videos are put together by the great team of Will Fulford and Yve Assad from The Fast and Dirty.com, so you won't be dissapointed!